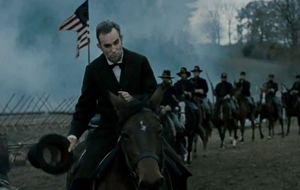 Steven Spielberg's name will go down in history books (or, should we say history tablets?) as a man who shaped an entire era of blockbuster movies. Its only fitting, and ironic to a degree, that he decided to tackle the story of the man that shaped an entire country through a film which is decidedly on the opposite end of the spectrum of most of those blockbuster efforts.

2011 may not have been a banner year for Mr. Spielberg, but it was still a year most filmmakers never get the chance to have. He released two films within one week of each other and saw both go on to different degrees of success. The Adventures of Tintin became a solid international hit, while the less expensive War Horse performed respectably and garnered Spielberg some of the usual Oscar attention.

But it's after many years of rumors that his anticipated Lincoln is making its way to theaters. The biographical drama has already pulled in over $1 million domestically after opening in just 11 theaters last weekend. Critics are lauding the film and its very likely that it will get some significant Oscar attention from the Academy over the next few months.

But how will that translate to general audiences? Biographical dramas can be hit and miss when it comes to theatrical box office. Having the pedigree of names like Spielberg's, Abraham Lincoln, and Daniel Day-Lewis certainly guarantee a strong turnout, but its been the film's marketing campaign that has made a concerted effort to generate awareness and interest among the mainstream - something War Horse didn't really do to the same extent before release last year (and it opened to a modest $7.5 million as a result, before legging out to nearly $80 million). The same applies to Spielberg's small platform release in 2005, Munich - another Oscar favorite but one that didn't find a large audience in theaters.

We don't think that's bound to happen with Lincoln, though.

The film's marketing campaign has strategically placed TV spots through the presidential debates and eventual election over the past couple of months. Meanwhile, online promotion has been heavy for such an unconventional film (relative to the fanboy-heavy movies that are usually favored when it comes to online advertising). There's no doubt that Disney and DreamWorks see the potential of a movie like Lincoln when it comes to the general public.

Aside from the drawing power of Spielberg's name, the 16th President of the United States is arguably the most widely beloved in American history. The particular story of this film is one that should resonate with every American today. Throw in the huge ensemble cast filled with recognizable names and faces (Tommy Lee Jones, Sally Field, Joseph Gordon-Levitt, etc.) led by one of the most revered actors of our time in Day-Lewis, and the combination for Lincoln is a potent one.

Nothing is ever a safe bet at the box office. The downsides are that we're coming off a heated election season which could dampen some desire among audiences to see a movie about politics. Moreover, if the film is as "talky" as reviews seem to indicate then it certainly limits the appeal to an extent (performances like 2010's The King's Speech are mere exceptions to the rule).

That being said, we can't help but feel the pros outweigh the cons with Lincoln. The film will have half of November and all of December to enjoy drawing in holiday crowds (something War Horse partly missed out on due to its later release on Christmas Day), the marquee attractions of Abraham Lincoln and an all-star cast guarantee something for audiences to latch onto immediately, and perhaps above all, this is the time of year when this kind of a film can thrive.

Here at Boxoffice.com, we're currently predicting an $18 million opening weekend followed by a leggy run. If Lincoln can transcend its genre and turn into the history film that parents feel obligated to take some of their older children to see, a run for $90 million or more could well be in the cards.