'Twilight' At Midnight: An Era Comes To An End 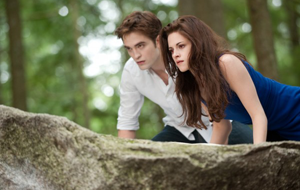 For the third time in just sixteen months one of Hollywood's biggest and most lucrative box office beasts is coming to an end. The Twilight Saga: Breaking Dawn - Part 2 marks the fifth and final film in Stephanie Meyer's book series-turned-movie franchise that seemed like it just began.

It was only four years ago when the first film shocked the industry with its massive $69.6 million opening. Nobody anticipated that a little movie called Twilight would actually out-gross Quantum of Solace, Daniel Craig's second James Bond outing, domestically.

While not expected to be quite as big of a blockbuster as two other recent series finales (The Dark Knight Rises and Harry Potter and the Deathly Hallows Part 2), Breaking Dawn - Part 2 is still a dominant force at the end of 2012. The series has become remarkably consistent since exploding with some of the best opening weekends of all-time, starting with 2009's first sequel New Moon. But the true driving factor of this franchise has always been the fervor of the die hard fans. Without them, the series wouldn't have claimed the two midnight debut records that it has so far.

So, now seems like a perfect time to look at midnight box office performances a little closer.

The advent of huge midnight crowds has been fast, and relatively recent. Up until 2005, the record for a midnight debut was a modest $8 million - set by The Lord of the Rings: The Return of the King in 2003. That record fell to Star Wars: Episode III - Revenge of the Sith in 2005 when that long awaited finale banked $16.9 million during the wee hours of the morning.

Since then, five more films have gone on to claim the midnight trophy: The Dark Knight ($18.5 million), Harry Potter and the Half-Blood Prince ($22.8 million), The Twilight Saga: New Moon ($26.3 million), The Twilight Saga: Eclipse ($30.1 million) and the current record-holder, Harry Potter and the Deathly Hallows Part 2 with an astonishing $43.5 million (admittedly boosted by 3D prices, but still the champ when it comes to actual tickets sold).

For the record, the first Twilight bagged a respectable $7 million at midnight.

For those wondering, The Return of the King stole the record from Star Wars: Episode I - The Phantom Menace and the first Spider-Man - each having sold approximately $7 million worth of midnight tickets in 1999 and 2002, respectively. In a matter of ten years, the record has increased by a whopping 621 percent.

What's behind the sudden popularity of catching late night debuts? Several factors: primarily among them is the growing trend of fan-driven franchises, a trend that arguably began with Star Wars itself. Once studios and exhibitors saw the kind of rush-out demand from those fans, and as more and more popular series became adapted for the big screen, midnight shows turned from being a fan niche to a cultural event. Now, it's not just the die hard fans driving them but the more casual fans and general audiences too. Social media has played a big hand in spreading the word about them, as well as the regular inclusion of midnight premiere announcements in marketing campaigns of films.

The effect? Midnight returns for films like Spider-Man and The Return of the King typically represented between 18 and 25 percent of the film's opening day gross. Today, each of the top seven midnight grosses account for no less than 36.1 percent of a film's opening day (the highest share belonging to the Potter finale with 47.7 percent).

Reasons for the varying shares number many, but some of the prevailing factors include release dates (early summer/winter releases have to contend with school and work days), location counts, lowered demanded due to advance screenings before midnight (example: Transformers 3) and the size of the die hard fan base relative to the casual audience.

All in all, the top 25 midnight grosses of all-time now average $16.2 million (remember, that's just $700,000 less than what the final Star Wars movie set the record with seven and a half years ago).

The average opening day of those same 25 films is $53.3 million ($3.3 million higher than the opening day record set by Star Wars in 2005), meaning the average share is now up to 28.8 percent. That figure will only continue to climb with Breaking Dawn - Part 2 set to repeat its series' history, followed by the next three The Hunger Games films, The Hobbit movies, more Marvel movies, and another Star Wars flick between now and 2015.

If anything, we'd love to see the industry start keeping more exact track of its midnight performers - something that has improved over the years, but still lacks the kind of specificity that helps to cull more meaningful information from.

What are the odds of Breaking Dawn - Part 2 beating Potter's record? Difficult. The comparison isn't apples-to-apples considering the latter had 3D and IMAX prices to give it a boost. No Twilight film has had (or will have, in this case) the benefit of 3D price hikes, so it may be more of a battle for second place (or first place among 2D films) - currently held by The Dark Knight Rises with $30.6 million ($300,000 ahead of Breaking Dawn - Part 1).

For what it's worth, many theaters are holding Twilight Saga marathons ahead of the last film's midnight premiere on November 16, so it will be interesting to watch whether or not the grosses from those are counted separately or toward the "official" midnight number. Whether they are or not, there's little doubt that a lot of theaters will reach capacity at 12:01am on November 16.

Below you can find a list of the top 25 midnight grosses of all-time so far (ties default to the order of release). Please keep in mind that all of these numbers are estimates, and in a few cases, rough approximations based on limited reporting in the early 2000s before box office returns at midnight were as closely followed. By the same token, the number of theaters many of these films played in vary widely. It wasn't until the past five years or so when midnight debuts were regularly given 2,000-3,000+ locations at midnight.

Note: Reported numbers for The Phantom Menace range between $6 and 8 million

Special thanks to the Boxoffice.com Forum community for their contributions in helping to collect this data.