close
Tickets for the first installment of the anticipated adaptation are now on sale at select theaters, but is the social media buzz measuring up? 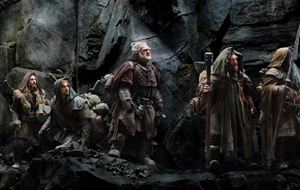 The holiday movie-going season is in its early stages right now, and all eyes are slowly turning toward the looming release of The Hobbit: An Unexpected Journey on December 14. Early reports today suggest that the film ate up 33 percent of Fandango sales on Wednesday, overtaking both Skyfall and next week's Twilight finale for #1 on the popular ticketing site.

What will surely be the year's final mega-blockbuster has a lot to live up to. That's not just because of the weight of history it carries from The Lord of the Rings trilogy, but also because of the fact that 2012 - while hit and miss overall at the box office - has already produced three huge blockbusters. As the first to ever generate three $400+ million grossing films domestically, one might say this year has gone on an unexpected journey itself. Can The Hobbit live up to and carry on that namesake?

As a bit of advance Twitter tracking, let's check out where this year's biggest films stood in the social media circle 6 weeks out from their release.

February 10-14: The huge fan following of the film sparked incredible amounts of online discussion in a way usually reserved for the Harry Potter and Twilight series with the youth-driven social media. The Hunger Games was claiming its own right to the crown though as it tallied 23,688 tweets during this five-day frame at six weeks out from release. That stands as the best total of any film in our comparison today, and they boasted a solid 12-1 positive-to-negative ratio. Facebook fans tallied a strong 1.8 million on February 10.

March 23-27: Just as the above film was opening in theaters to unexpected numbers and excellent word of mouth, comic fans were still yearning for the ultimate superhero team-up and driving Twitter buzz to 13,569 tweets six weeks out from The Avengers' record opening. The quality of that buzz was a fantastic 17.8-1 in positive-negative tweets, while Facebook carried 924,225 fans on March 23. Positive signs were certainly there, but the Marvel flick still went above and beyond all of them.

June 8-12: The Avengers was rolling, the May box office stumbled after it, and fans were finally getting closer to the end of Chris Nolan's Dark Knight trilogy. During the same point in its release cycle, The Dark Knight Rises tallied 10,109 tweets. That's the lowest (though still quite strong) total of our four comparison films here, but the upside was that it carried the best positive-to-negative ratio at 19-1. Rises also boasted the most Facebook fans at the same point with a nearly incomparable 11.46 million on June 8.

November 2-6: With the newest trailer releasing in October, a slew of new images and musical score previews finding their way online, and the buzz around ticket sales that began in select theaters on November 7, The Hobbit's social media presence is continuing to grow. During the comparable five-day frame, the pic tallied 12,665 tweets and a 15.6-1 pos-to-neg ratio. While the film has the fewest number of Facebook fans (758,331 as of November 2) compared to the other three 2012 blockbusters at the same point, that's still a big number and nothing to worry over.

In short, as far as social media buzz goes, The Hobbit is doing exactly what it needs to. Awareness among general audiences is steadily increasing as promotional materials make their way into theaters and the rest of the media, ticket sales are being pushed in a can't-miss-it kind of way across Fandango as we speak, and fans are as excited as ever. More importantly, the discussion is ongoing and the news/debates over High Frame Rate (HFR) presentations will only serve to heighten awareness even more going forward.

If The Hobbit's ability to measure up to the Twitter buzz of these other blockbusters translates to similar box office figures, Warner Bros. will be ecstatic. Nevertheless, a cautionary tale: anything (for better or worse) can happen in six weeks - so the promotional journey has only begun.