close
Episode VII and the Disney deal are dominating Internet chatter, so what do we think? 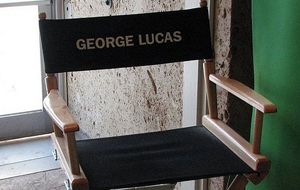 For the first time in thirty years, that chair is empty for the Star Wars universe. And this time, Mr. Lucas won't be returning to it.

It's been two days since the mega-blockbuster deal between Disney and Lucasfilm sent shockwaves throughout the film industry, social media, and pop culture as a whole. Our forums have been buzzing non-stop about the surprising news that broke on October 30 with seemingly no indications of what was coming.

Now that the dust starts to settle, shock has turned to speculation. Who will be chosen to shepherd one of - if not "the" - most iconic film series in Hollywood history when it returns to theaters in 2015?

Everyone seems to have an opinion, and rightly so. There are more than a few movie fans and film professionals in the world today that were inspired and impacted by the Star Wars movies. That group includes some prolific writers and directors, and some of those very names have been popular nominees to carry the baton among fans for the last two days (or longer).

Sure, Joss Whedon immediately comes to mind with his success on Disney's and Marvel's The Avengers this year. Christopher Nolan is incredibly popular and coming off a huge franchise himself. Then there's J.J. Abrams, currently in post-production on the much anticipated Star Trek Into Darkness.

Not only are these obvious choices, they're highly unlikely to carry the torch for Star Wars anytime soon.

First off: Whedon is neck-deep in developing his take on The Avengers for Disney itself already, Mr. Nolan has already done the reboot thing once and has a fixed eye on original content, and Mr. Abrams - while perhaps the most likely of these three - would ignite a third World War among fan boys if he went directly from Star Trek to Star Wars in the span of two years. (On second thought, maybe that's a reason why he should.)

Never say never, but let's be honest with ourselves here. History points to the future Star Wars: Episode VII director likely being less of a brand name than those guys are. Nolan wasn't a household name when Warner Bros. selected him for Batman Begins. Abrams was familiar to audiences before Star Trek but primarily as a successful television producer and not a blockbuster filmmaker (yet, at the time). Ditto for Whedon before The Avengers. That fact doesn't apply to just those guys, but can similarly be said of Marc Webb before taking over the multi-billion dollar Spider-Man franchise this year, or Rob Marshall when chosen to carry on Disney's Pirates franchise with On Stranger Tides.

In other words, how often does a brand name director take over a franchise after their career has been firmly established? Very rarely. How often do guys make names for themselves by taking over a big franchise? Pretty often.

We all have our directorial wish lists for anticipated films, but the Boxoffice.com team is preparing for more likely and less established candidates. (And, because we're human too, one or two pipe dreams.) Some of our favorites include:

Another popular suggestion over the last few days, but one that has a lot of merit. Bird has the Disney connections thanks to his success directing Pixar's The Incredibles and Ratatouille. Moreover, he successfully migrated to live action with critical and commercial praise over last year's Mission: Impossible - Ghost Protocol. His familiarity with both family films and live action entertainment makes him a prime contender.

The argument can be made that he comes from a hard-R sci-fi universe - something Disney won't do with Star Wars. But with District 9, he proved that he could make a story-driven sci-fi tale grounded in reality while delivering outstanding visuals on a shoestring budget with the help of Peter Jackson's WETA Digital. Watch out for his upcoming Elysium in 2013 as well, again written and directed by Blomkamp himself.

He made his feature film directorial debut with Tron: Legacy and despite its modest box office performance that film has a fair share of fans. Moreover, he also has the Disney connection and is currently prepping another sci-fi adventure flick - Oblivion, starring Tom Cruise and Morgan Freeman, due for release in 2013.

More of an obscure choice here, but Nichols is quickly rising through the Hollywood ranks. His original films Take Shelter and Shotgun Stories have garnered multiple awards and critical praise, with the former showing his ability to take a character-driven story and turn it into something bigger than its genre. A long shot consideration without one wide release box office hit on his young resume, but a worthy one nevertheless.

The director of Run Lola Run and The International stepped full-on into the sci-fi realm with this year's Cloud Atlas (alongside the Wachowski siblings). Another long shot choice, but the visual scope of that recent film is the kind of aesthetic that could translate well to the Star Wars universe.

The director of the indie sensation Brick made waves this year with the critically praised and commercially successful Looper, which has already been declared one of the freshest takes on the sci-fi genre in years by a number of folks in the industry.

Unlikely, sure, but if Star Wars has one modern comparison (not named Harry Potter) in terms of the financial success of a trilogy, box office stature, widespread commercial appeal, and pop culture impact then it's his adaptation of The Lord of the Rings. To boot, the trilogy broke the fantasy genre curse of Oscar that the original Star Wars just barely missed out on.

He's already got Harry Potter and the Prisoner of Azkaban under his belt, but he can duel-wield with smaller profile films like Children of Men as well. Combining his individual successes in the fantasy and sci-fi genres could be a potent mixture for Disney if he's interested in taking on another fantasy franchise.

Moon and Source Code were huge critical hits and the former boasts a small fan following. Despite the lack of commercial box office success, Jones is the kind of sci-fi director with a big mainstream hit likely to come sooner than later.

The versatile thespian-turned-filmmaker is at work on Paramount's reboot of Jack Ryan as we speak, and it was his successful shepherding of Thor in a pre-Avengers world that confirmed him as a blockbuster filmmaker candidate.

At one point he was attached to reboot Batman before Chris Nolan came along, and then he nearly directed The Wolverine (now being helmed by James Mangold). With Black Swan and 2014's upcoming Noah pushing him to the Hollywood forefront, perhaps missing out on those franchises was just necessary to get a shot at George Lucas's universe (or even his own?).

Go with us on this one for a minute. Lucas and Spielberg have had a close working relationship for decades, yes. But more interesting is the size of Spielberg's own fan base exclusive of the huge Star Wars fan base itself. As our own Amy Nicholson argues, bringing Spielberg's name into this franchise might be one of the few ways (or the only one) to unite fans again after the relative (but sometimes overstated) disappointment of the prequel trilogy. It seems highly unlikely that he would ever do it, but that's probably just because it's a fan's dream scenario and we live in a world that tries to teach us dreams don't always come true. The beauty of movies, however, is that sometimes they do.

Any other names we didn't include in our list? Share them here and on the Boxoffice.com Forums!