2013 Preview: The Crowded Month of May 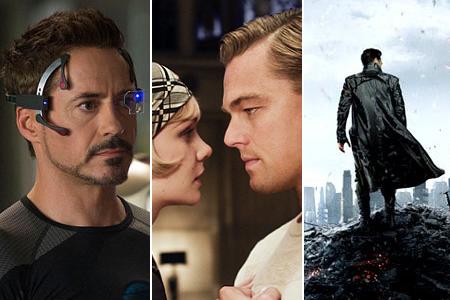 May 2013 is poised to kick off the summer movie season in a big way.

Living up to the impressive $1.024 billion haul that May 2012 earned won't be easy. The big challenge will be matching the impact of Marvel's The Avengers. Disney's superhero flick accounted for $532.5 million--or more than half--of May 2012's total. The Avengers cast a shadow over the rest of the month, and films such as Battleship and Dark Shadows opened soft as a result.

Disney/Marvel will kick off the summer season again this year with Iron Man 3 on May 3. The first full trailer for IM3 generated plenty of online enthusiasm, and the influence of Christopher Nolan's Dark Knight trilogy is clear in the somber, brooding preview. There's little doubt that Iron Man 3 will top the $128.1 million debut of Iron Man 2, but don't expect it to match the $207.4 million opening of The Avengers.

May 10 will bring the release of The Great Gatsby. The decision to move Gatsby from December 2012 to May 2013 should prove to be a wise one. Gatsby would have had to compete with other prestige flicks such as Les Miserables and Django Unchained. Now, the Warner Bros. release will serve as a refreshing bit of counter-programming for adults who could care less about The Avengers universe. (There are a few of them out there.) Gatsby's performance in 3D will be particularly interesting to watch. If it succeeds, more period dramas could rush to embrace the format. If it fails, it will mark another loss for the "EVERYTHING will be in 3D" prophets.

Star Trek Into Darkness comes a week after Gatsby on May 17. Again, the impact of Nolan/TDK is clear in the film's powerful trailer. It's working. Into Darkness lit up Twitter and Facebook after the premiere of the trailer. Director J.J. Abrams is masterfully turning the property into something that isn't just for, well, nerds. Into Darkness should easily top the $384.9 million worldwide haul of 2009's Star Trek.

Memorial Day weekend is worth keeping a close eye on. Three powerhouse films are set to open: Fast & Furious 6, The Hangover Part 3 and Epic, an animated film from the talents behind the Ice Age films and Rio. It'll be a rough fight for first place between F&F 6 and Hangover 3. The last Fast & Furious film opened to a whopping $86 million, while The Hangover Part 2 also managed $86 million. It will come down to which franchise still has more life in it. Call it a coin flip at this point. There will still be plenty of room for Epic, but the animated flick has very big shoes to fill. Ice Age: Continental Drift has earned more than $879 million worldwide since opening in July, and Rio posted an impressive $486 million worldwide haul in 2011. If Epic comes even remotely close to those films at the box office then it will be a huge financial success.

The last major release of May 2013 will be Universal's The Purge on May 31. The stark drama about a future where martial law rules and murder is legal for brief periods of time faces a tough road to success.