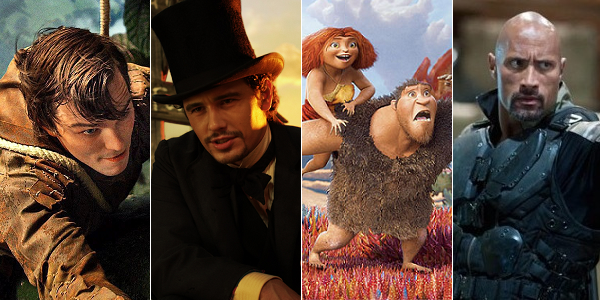 March 2012 shattered box office expectations in a way that will be tough for March 2013 to live up to.

The success of Lorax, 21 Jump Street and The Hunger Games combined with other robust earners made March 2012 feel a lot like the summer. The month recorded a total domestic box office tally of $942.8 million, which is dangerously close to May 2012's $1.02 billion rake.

A strong March can change the way that the mainstream media writes about Hollywood after the crucial first quarter comes to a close. It can be the difference between "People aren't going to the movies anymore" and "The movie industry is clearly booming."

So how will March 2013 compare? Here's our breakdown.

Warner Bros. is clearly hoping that Lord of the Rings fans will line up for Bryan Singer's Jack the Giant Killer. Singer knows how to hit it big, but Superman Returns also proved that he has the ability to deliver a bomb. This one is far from a sure thing.

With Oz: The Great and Powerful, Disney will look to repeat the success it had in March 2010 with Alice in Wonderland, a $1 billion worldwide hit. Unfortunately, Oz star James Franco is no Johnny Depp. Grosses will be healthy, but Oz won't come close to $1 billion worldwide.

20th Century Fox will release DreamWorks Animation's The Croods on March 8. The Croods doesn't come with the same brand recognition that helped Lorax, so it might have a tough time matching the Universal release's impressive worldwide haul.

G.I. Joe: Retaliation was meant to be a summer movie until Paramount decided to move it away from June 2012 and into March 2013. We're betting that the move will pay off. Three factors should help Retaliation pass the $301.5 million worldwide haul of 2009's G.I. Joe: Rise of the Cobra: 1) The addition of 3D; 2) More Channing Tatum; 3) Bruce Willis in the cast.

21 & Over--a film about crazy partying--should have no problem tapping into the same crowd that flocked to similarly-themed Project X.

Admission combines the talents of Tina Fey and Paul Rudd, two of the strongest comedic talents working today. How can it miss?

The Incredible Burt Wonderstone reunites Bruce Almighty stars Jim Carrey and Steve Carell as dueling magicians. Both stars are losing their drawing power these days, but combining forces could help give them both a boost.

Open Road's The Host could turn into a Cloverfield-level hit if it connects in the right way.

The Place Beyond the Pines, a drama set in upstate New York starring Ryan Gosling and Bradley Cooper, could generate Oscar talk early in the year in order to become a must-see for adults seeking serious-minded entertainment.

Tyler Perry's Temptation: Confession of a Marriage Counselor looks promising based off its first trailer. Perry almost always stumbles at the box office when not playing Madea, but this could be the movie that finally breaks that streak. Added bonus: a lot of people will show up just to see if Kim Kardashian can act.

Colin Farrell continues to push for bigger things at the box office with Dead Man Down, a New York crime thriller. Expectations should remain modest for now based on Farrell's less-than-stellar track record.

While there are a lot of promising films coming out in 2013, there is no Hunger Games on the horizon. As a result, March 2013's overall box office will almost certainly fall short of March 2012's.

Tags: 21 & Over, Jack the Giant Slayer, Admission, Dead Man Down, Oz: The Great and Powerful, Carrie, The Incredible Burt Wonderstone, The Croods, G.I. Joe: Retaliation, The Host, The Place Beyond the Pines, Tyler Perry's Temptation: Confessions of a Marriage Counselor
Print