Boxoffice's Most Impressive Runs of 2012 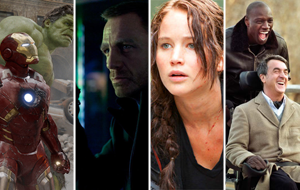 As fast as it came (or slowly, for fans of several long-anticipated franchise flicks), 2012 is now a memory. Like any year, up or down, it left an indelible mark on box office history. We're taking one final look back at which films' runs impressed us the most.

By way of a preferential voting system, the Boxoffice team has compiled our top five performers: one set for domestic and one for international.

We decided early on that our criteria had to expand beyond what movies simply made the most money. Instead, our aim is to highlight the films whose success exceeded franchise or genre traditions, broke from the typical in terms of legs, reached massive numbers without the aid of 3D surcharges, and/or various other metrics and points of fact that are often overlooked when it comes to these kinds of lists.

Ben Affleck's third directorial effort and (highly likely) Oscar contender may have "only" opened to $19.5 million back in October ($4.3 million less than his 2010 hit, The Town) but Argo's extraordinary word of mouth kicked in overnight and helped generate an impressive 15.5 percent drop during its second weekend. The following two weekends would drop 26.5 percent and 15.5 percent (again), respectively - far below the average declines of high profile wide releases on any given weekend.

The end result was a 5.5 multiple leading to a $108 million (and still counting) domestic take--a near 18 percent increase over The Town's $92.2 million gross two years ago (despite Argo having gotten off to a slower start). For those who remember our article on why movies about movies typically falter at the box office, Argo's run becomes all the more noteworthy.

The political drama became Steven Spielberg's highest grossing non-franchise film since 2002's Catch Me If You Can and hot off of a $7.3 million New Year's weekend with a possible Oscar boost yet to come, the run is far from over. Through December 31, Lincoln had taken in $131.9 million stateside. The film was strong out of the gate with a $944k opening in 11 theaters and it then translated that success into a wide release with its $21.1 million second weekend.

Since increasing a strong 22 percent over Thanksgiving weekend, the film's legs have continued to impress for a biographical dialogue- and politically-driven film. Combined with the natural appeal of Spielberg's and Lincoln's own name, Daniel Day-Lewis's master performance is no doubt contributing to the film's staying power. Lincoln is set to overtake the domestic gross of The King's Speech ($138.8 million) early in January.

This film's earth-shattering $207.4 million opening stands as the tallest and, presently, most eye-catching in modern box office history. As only the third film to ever reach $600+ million domestically (non-adjusted for inflation), the total gross is also pretty on the eyes (and the Mouse House's wallet). Its a foregone conclusion this movie makes the shortlist of most impressive runs for any given year--or any decade for that matter.

While the film played out to a generally predictable trajectory after opening weekend (thanks to mathematical precedents in past May releases such as Iron Man and Star Trek), there's still no downplaying the uber-success of Joss Whedon's superhero extravaganza. When all is said and done, this may be the most memorable run of 2012 and since that of Avatar. Kudos to Marvel and Disney for their years-long strategy. It paid off big time and the intangible benefits from The Avengers' success probably outweigh those of other films on our countdown.

Yes, we're jumping ahead to the top spot because two films split the trophy when our team's votes were tallied. The Hunger Games may have had a big fan base coming in thanks to the popular Suzanne Collins trilogy of novels, but any new franchise that can post one of the best openings of all-time and still leg out to $400+ million without any help from 3D prices has to be considered impressive. Hunger's opening weekend even out-grossed (and out-sold in terms of tickets) the first seven of the eight Harry Potter movies.

If you're impressed now, that's before even considering the muted budget and fairly modest expectations for Hunger's performance before release. The $152.5 million opening was arguably just as or more shocking than Avengers' $207+ million show-stopper, and the fact that a new fan-driven franchise was able to stretch that kind of early demand outward to $408 million domestically earns the film half of our top spot.

Prior to 2012, no Bond film had ever reached $200 million domestically (not accounting for inflation, obviously). Not only did James Bond celebrate his 50th cinematic birthday this year with an extremely well-received film, a hit theme song from Adele and some of the best marketing synergy any franchise has ever captured, but he stormed past $200 million and gunned for $300 million. That's a figure which Skyfall will hit in the early weeks of 2013.

The film will end its run as the third-highest grossing 2D film of 2012 and fourth overall. That marks the best yearly rank for a Bond title in more than 33 years. By comparison, Quantum of Solace and Casino Royale each finished ninth in 2008 and 2006. In terms of tickets sold, Skyfall reached a level only previously seen in the franchise with 1964's Goldfinger and 1965's Thunderball. Impressive, Mr. Bond.

Christopher Nolan's Batman finale continued the upward trend of franchise grossers when it comes to the international market. In fact, prior to another film's recent success (which we'll cover below), The Dark Knight Rises posted the second best overseas gross since 2007 for a non-3D film with its $631.2 million cume--trailing only Harry Potter and the Deathly Hallows Part 1's $653.6 million foreign tally in late 2010/early 2011.

While some of the success can be attributed to the continued expansion of overseas markets like China, the figure still exceeded the international grosses of The Dark Knight ($468.6 million) and Inception ($531 million) by comfortable margins. Overseas, Rises stands at #9 all-time among non-3D releases.

$718 million is probably not the first number you'd expected from a third sequel in an animated franchise that made $161.1 million domestically, but that's exactly what Continental Drift banked overseas. The figure represents an incredible 81.7 percent share of the film's global gross. Domestic returns were par for the course and down nearly 18 percent from 2009's Dawn of the Dinosaurs, but the continued appeal of the series with international audiences translated to the soon-to-be third best overseas take of 2012 (first among animated movies) and ninth best overall.

3D may have contributed significantly to the film's returns, but $890.5 million landed The Avengers at #4 on the all-time overseas chart and dramatically improved upon the non-adjusted $418 million overseas gross of 2002's Spider-Man. Interestingly, no other Marvel lead-in film (Iron Man, Iron Man 2, Captain America, Thor and The Incredible Hulk included) ever topped Spidey's overseas take despite market expansion, a decade of inflation, and 3D surcharges (for Captain and Thor).

China was a major part of the film's success as well, becoming the 10th highest-grossing film of all-time at the Chinese box office. There was never much doubt about The Avengers becoming a worldwide hit, but serving as the overall highest grossing non-James Cameron film of all-time (and fourth-highest overseas behind the two Cameron flicks and 2011's Harry Potter finale) is impossible to overlook.

Yes, another tie. Perhaps the most overlooked box office run of the year is arguably this French-produced dramedy which never attained a wide release in North America. The Intouchables made a mere $13.1 million domestically, but a massive $407.7 million in overseas markets--97 percent of its entire box office take. It's rare to see this kind of box office run even from blockbuster movies and franchise pics. For the year 2012, Intouchables stood as the 10th highest grossing film overseas and the 4th best among non-3D flicks. Let this serve as a fresh reminder that not all crowd-pleasers generate the lion's share of their success in America.

What else can be said about Daniel Craig's third outing as 007? For starters, Skyfall, through December 31, achieved $706 million internationally and has yet to open in China--meaning a final overseas gross of at least $750 million is all but guaranteed at this point. For the international year, that will position the Bond flick as the highest grossing 2D release of 2012 and second highest among all films behind The Avengers.

All-time, Skyfall appears to be heading toward the second-best 2D gross in international history, behind only Titanic and--we project--topping The Lord of the Rings: The Return of the King's $742.1 million. Skyfall's current $706 million overseas tally blew past the previous high for the franchise: Casino Royale's $426.8 million. If all of this wasn't enough, the film seized the aforementioned perfect storm of marketing synergy at the hub of all things Bond when it topped Avatar last month as the United Kingdom's highest grossing movie in history with $158+ million -- a drastic increase from Casino Royale's 2006-leading $105.9 million U.K. gross.

No doubt, you may disagree with some of our choices and/or how we've ranked them. As always, we encourage you to visit our forums and join the active discussion on this subject with our community.

Here's to a 2013 filled with impressive box office performances...

Phil Contrino and Daniel Garris contributed to this article.