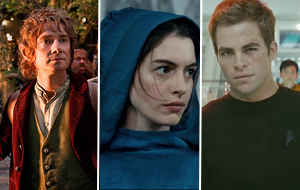 After a strong early response to our newest column last week, the second edition of Boxoffice.com's Most Anticipated Movies sees The Hobbit hold onto the top spot for a second straight week. For the year, this marks the 13th time that the film has ranked or tied for #1 among movies we've been tracking since the forum feature's inception.

Notable changes this week include strong bumps for Les Miserables and Zero Dark Thirty. The former jumped to #2 while the latter entered the top ten, both on the heels of news regarding very well-received critical screenings of the films last week. Django Unchained also benefited from some growing buzz while The Hunger Games: Catching Fire posted a strong debut on our chart at #8 one year ahead of its November 22, 2013 release.

For the full list of films we're tracking, and to post your own input on what flicks you're most excited to see, please visit this page on our forums and join the discussion.

Now eligible for ranking: Frozen
Films no longer eligible: The Collection and Killing Them Softly (exits at #17)