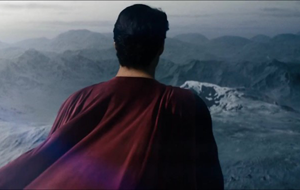 If Warner Bros. is hoping for 2013's Man of Steel to carry the torch left behind by Chris Nolan's Dark Knight trilogy, they're off to the right start.

Early last week, the studio debuted the first full trailer online (second overall when counting the summer's shorter teaser trailer) and it immediately made waves throughout the Internet. In fact, within 24 hours the film was tracking as highly as The Hobbit: An Unexpected Journey - during the middle of its release week - on our daily Twitter tracking.

Man of Steel yielded over 43,000 tweets on Tuesday, December 11 with an excellent 17:1 positive-to-negative comment ratio. The tweet count represented a 10,674 percent increase in Twitter activity from the day before.

To give an idea of how impressive that single day tweet total is for Man of Steel, it exceeded that of The Twilight Saga: Breaking Dawn - Part 2's 41,870 tweets generated on the day of its first full trailer's release back in June. The Twilight franchise has always had an incredibly strong following across social media platforms, and while the same can be said of comic book movies and their fans, this kind of interest level is a great sign when considering Superman's disappointing box office history after the early 1980s.

Man of Steel's Twitter activity was also near identical to that of The Dark Knight Rises when its first full trailer debuted online almost exactly one year ago. The Batman finale tallied 41,629 tweets on December 19, 2011, a 997 percent jump from the day before.

Another comparison of note: Marvel's The Avengers debuted its second trailer on February 29 of this year, generating 37,021 tweets on that day and representing an 1,161 percent increase in activity from the day before.

In short: so far, thanks to the large number of online fans and expanded interest that director Zack Snyder and producer Christopher Nolan bring to the franchise reboot, Warner Bros. and DC Comics are definitely hitting the right notes when it comes to the first stage of marketing for this highly anticipated summer tent pole.

Man of Steel is currently scheduled for release on Friday, June 14, 2013. You can view the trailer below.