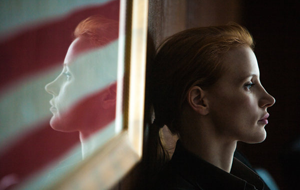 Let's get the obvious fact out of the way: movies based on current wars, more often than not, are box office poison. Sometimes to no fault of their own.

The recent history of the "genre" has been a fairly ugly one. Green Zone, Body of Lies, Charlie Wilson's War, Lions for Lambs and The Kingdom each saw disappointing box office results relative to their production and marketing budgets. On average, those five films actually lost money for their backing studio - the most "profitable" of the bunch being Charlie Wilson's War, which banked a low 16 percent more than its combined budget. By the time exhibitors were given their share, it's unlikely even that film became profitable until long after it hit the home video market.

2005's Jarhead - which holds the second best opening weekend of any recent war movie with $27.7 million - didn't exhibit strong legs at the domestic box office (finishing with less than $63 million) and totaled $96.9 million worldwide against its combined $103 million negative costs.

The cause seems simple: whether or not a film plays well with critics and among the film industry itself, the trend has shown that movies based on current or recent war events (particularly those revolving around Iraq and Afghanistan) aren't piquing the interests of a wide audience. After all, don't most moviegoers visit the theater for escapism? For the past decade, war movies venturing into cinemas have been doing so against the grain of that cardinal rule when it comes to movies.

Granted, there have been some successes. This year's Act of Valor was a sleeper hit, taking in $70 million domestically and grossing almost $80 million globally against its modest $45 million combined budget. But again, it was positive word of mouth and the controlled budget (largely due to having no Hollywood stars commanding big paychecks) that really aided that flick's bottom line.

Loosely speaking, we can also include Ben Affleck's Argo and its incredible run over the past few months. That's a bit of a different beast, however, because it isn't driven by a military focal point and isn't based on current events. In other words, it's a very well made true story that few moviegoers knew anything about and haven't been force fed on the news every day for the past decade.

What about Paul Greengrass's United 93? The film based on the heroes of the crashed 9/11 flight was lauded by critics, and while it more than doubled its negative costs at the worldwide box office, audiences still didn't go for it. Why? Arguably because it was too soon to be made for a large audience given the lack of resolution to the "bigger picture" surrounding those events. Excellent movies don't always provide escapism. United 93 made $31.5 million domestically and $76.3 million worldwide. Those represent the second and third lowest, respectively, of the 14 war-related films since 1999 that we're analyzing here. The low $35 million budget is what kept United 93 a financial success though.

And then there's 2009's Oscar winner for Best Picture: The Hurt Locker. The film's summer release meant that it never had the opportunity to screen in theaters during the lucrative awards season. Fair enough. But, the $17 million domestic run still makes it the lowest grossing Best Picture winner in modern history. Nevertheless, with $50 million banked globally and a small $19 million combined budget, it remains the most profitable war movie in our discussion.

But the point still stands: neither an Oscar winner nor a film based on recent events managed to capture a large audience in theaters.

Excluding Argo for obvious reasons, the average gross of war-related movies since 1999 is $60.7 million domestically and $107.8 million worldwide. Respectable figures, but notably driven by the biggest box office success on the list: 2002's Black Hawk Down. That Ridley Scott pic grossed $108.6 million domestically and $173 million in all. Its budget, coming in at a combined $125 million, was huge for the time though.

So what does this all mean for Zero Dark Thirty? Director Kathryn Bigelow has already achieved great success with her follow-up to The Hurt Locker. The film is winning over critics left and right, recently won the National Board of Review Award for Best Film and New York Film Critics Circle Award for Best Picture, and was just nominated for four Golden Globes. You'd be safe betting that it will be a major player when the Oscar nominations are revealed on January 10 - one day before Zero Dark Thirty opens in theaters nationwide.

But there's still history to consider. Clearly, critical reception has proven to not always convince moviegoers when it comes to war movies (or many other flicks for that matter). Last year's Oscar winner, The Artist, may not have been a war film but it is also further proof that awards don't always convince audiences to check out a movie either.

Besides the promise of a taut thriller, here's what Zero Dark Thirty has going in its favor: catharsis. Sure, we all generally know going into the film how the main conflict ends. From a storytelling point, that's a disadvantage in most cases. In this film's case, however, it will be playing to a world that has finally settled the era of the world's once most wanted criminal and terrorist. The world's problems may not be over, but the raid on bin Laden's compound in 2011 marks an important checkpoint in global - and especially American - history. One can argue that no other recent war movie has chosen a subject matter so potentially satisfying to an average moviegoer, especially when given that the journey getting to the night of that compound raid still remains untold to many potential viewers.

Granted, a calendar line-up doesn't make anything certain but it does display the intentions and confidence behind the film - especially when considering the risk taken to bump it from its original wide release on Christmas weekend and outside of the holiday season completely. Moreover, there's the recent controversy surrounding the bi-partisan disapproval of the film from Washington, D.C. over the film's depiction of torture usage. But as they say, any publicity is good publicity and that isn't likely to hurt the film's long-term prospects.

So far, the strategy is working. Zero Dark Thirty opened to $229,012 in its first two days of release at just 4 locations, followed by an estimated 3-day opening weekend of $415,000+. Black Hawk Down pulled $179,823 in its first weekend by comparison. Even when adjusted for a decade's worth of ticket price inflation, Dark Thirty is the clear winner for limited debuts.

A lot of things have changed in ten years, including moviegoers' and overall cultural tastes. The Boxoffice.com team is currently predicting a $15 million opening weekend and a $70 million domestic run, but while recognizing the potential of one or both of those numbers going higher should things fire on all cylinders. Black Hawk Down released in the aftermath of 9/11 and provided the rare January blockbuster that thrilled and satiated the desires of moviegoers in the early months after a national tragedy. If the box office fates have any say in the matter, Zero Dark Thirty looks well-positioned to bring things full circle after eleven years.