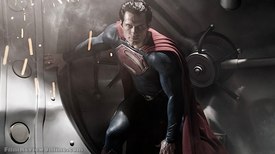 Expectations are high for June 2013's Man of Steel.

Warner Bros. needs a new mega franchise now that its two cash cows--Harry Potter and Batman--are finished. (At least for the time being. We don't think we've seen the last of either character.) Those two franchises helped Warner Bros. dominate the box office in recent ten years. Now Disney is set to prosper in the same way thanks to its acquisition of Marvel and all the lucrative superhero properties that came with as well as the recent purchase of Lucasfilm that will begin to pay off in 2015 with the release of Star Wars: Episode VII.

Man of Steel's trailers prove that the influence of producer Christopher Nolan is strong. Director Zack Snyder (300, Watchmen) has clearly dialed back a lot of his own stylistic flourishes in order to better serve the story. That's a smart move on Snyder's part considering that audiences around the globe widely rejected Sucker Punch, his 2011 dud. Nolan's lead is a good one to follow: The Dark Knight franchise generated nearly $2.5 billion in box office receipts.

Reboots of superhero franchises have a varied history. Batman Begins debuted to an underwhelming $73 million during its first five days. It took fans a little time to catch on to the fact that Nolan was taking their beloved character more seriously than Joel Schumacher had. Batman Begins finished its theatrical run with $374.2 million. X-Men: First Class posted a similar opening--more than $65 million domestically in five days--before winning over more fans and tallying $353 million worldwide. Then there's the case of 2012's The Amazing Spider-Man. Fans welcomed Sony's reboot with open arms, turning it into a massive $754 million global hit. Man of Steel could end up on either side of the spectrum.

Succeeding in June won't be easy for Man of Steel. A June 14 release date means that the superhero flick is sandwiched between two sci-fi films featuring A-list stars: After Earth with Will Smith opens on June 7 and World War Z with Brad Pitt opens on June 21. If either film ends up overperforming, Man of Steel's bottom line could be hurt. Man of Steel will also have to fend off the following flicks: Fox's The Internship, a new comedy starring Vince Vaughn and Owen Wilson and Lionsgate's magic-themed heist film Now You See Me on June 7; This is the End with Jonah Hill, Seth Rogen and James Franco on June 14; Monsters University on June 21; Kick Ass 2 and White House Down, a Roland Emmerich/Channing Tatum collaboration, on June 28.