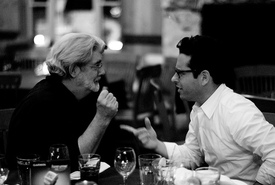 J.J. Abrams is now on board to direct to Star Wars: Episode VII. Can he help the franchise reach a new high-water mark at the box office?

Sarcastic pundits will quickly joke that if Disney hired a monkey to direct Episode VII people would still line up around the block. And they wouldn't be entirely wrong. The Star Wars brand holds such a sacred spot in the hearts of so many that even if fans question artistic choices--and they do that quite a bit--it doesn't stop them from forking over hard-earned cash. The documentary The People vs. George Lucas is full of stories of people who hated Star Wars: Episode I - The Phantom Menace but still saw it several times in theaters.

All kidding about monkeys aside, J.J. Abrams makes sense in this new role. He has the potential to add a lot to the property both artistically and commercially. The way Abrams rebooted the Star Trek franchise shows that he knows how to invigorate a brand. 2009's Star Trek earned an impressive $395 million globally, and expectations are high for Star Trek Into Darkness, a sequel that could easily hit $500 million globally if everything clicks. Super 8 proved that Abrams is still in touch with his inner child. After all, the Star Wars franchise is meant to be digested by young kids with active imaginations. George Lucas was quick to remind fans of that when the prequel backlash started to reach fever pitch.

So how big can Star Wars: Episode VII be? Well, anything less than $1 billion worldwide would likely be seen as a disappointment. Don't forget that 2005's Star Wars: Episode III - Revenge of the Sith managed an impressive $848 million globally. To achieve real success, Abrams will have to juggle the combination of serious undertones and playfulness that helps Star Wars appeal to such a broad audience. If he uses too much of either one he could create a situation in which die-hards only see the film three times in theaters instead of six.

Disney will be putting everything at their disposal behind Episode VII. If Abrams knocks it out of the park, then it's not hard to imagine Episode VII joining Avatar and Titanic in the $2 billion global club. James Cameron is lonely, after all. It will all come down to how well the film performs overseas. By 2015, China will be an even bigger film market than it is now and Episode VII's gross there could really push it to the coveted $2 billion plateau. And don't forget about the potential in other booming films markets such as Japan, Russia and Brazil.

Of course, a new wave of merchandising is likely to eclipse whatever Episode VII makes financially in theaters. Lucas is brilliant when it comes to tapping into enthusiasm for his characters, but he has nothing on the merchandising genius that exists at Disney. The combination is deadly. Abrams should start asking himself, "How will the framing of this shot look on a lunchbox?"

In all seriousness, Abrams now has the power to bring a beloved property to a new generation of fans. That has to be both daunting and exciting. More money will be made by all involved if he taps into the same emotions that made Star Wars Episode IV: A New Hope into a cultural phenomenon. He has to surprise us.