close
In a two-part article this week, we analyze the recent--and future--developments between the related genres. 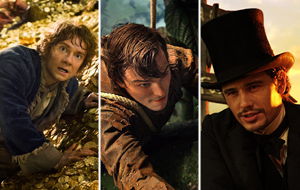 Hollywood is no stranger to a changing of the guard. It can come between one generation of actors and another. Creatively speaking, traditional hand-drawn animation gave way to the rising popularity of computer animation in the late 1990s and early 2000s. Sometimes, the box office itself sees a major shift when one genre reaches its peak and another takes its place. Are we in the middle of such a transition between go-to genres for Hollywood?

No, we're not referring to comic book adaptations. After dominating the box office for several recent years, it's clear that their reign is supreme for the moment. But over the last few years, there have been a growing number of science fiction box office hits -- a genre that has usually struggled outside of a niche fan base in the past. Simultaneously, with few exceptions, the fantasy genre hasn't maintained the consistent blockbuster pace it established at the start of the new century.

We find any possible shift intriguing because, in many ways, the two genres are cousins of each other. Some would even argue that one is entirely derivative of the other (but that's a debate for another day).

Less than fifteen years ago, if you predicted that some of the biggest and best movies coming around the corner would be science fiction and/or fantasy-based, besides having excellent foresight, you would have been laughed off. Neither of them had ever found consistent mainstream success in the 20th century. Star Wars? The exception that proved the rule.

Then came The Lord of the Rings and Harry Potter. The rest is history for those two, and each has influenced the industry since their 2001 debuts. Once the world saw what fantasy in the cinema could be, everything changed. The Chronicles of Narnia became the next logical step into a commercial fantasy series and its first 2005 entry shocked many by out-grossing that year's Potter movie (Goblet of Fire) domestically. Since then, the Twilight series briefly carried the blockbuster fantasy banner--although not quite on the same level.

Remember the *original* Clash of the Titans? The 1981 fan hit was revamped into a global blockbuster in 2010--the same year that Tim Burton's Alice In Wonderland amazed the industry with a huge $1 billion global box office payday. Other recent fantasy flicks include The Spiderwick Chronicles, Percy Jackson and Bridge to Terebithia. Those films weren't major blockbusters, but they definitely made their fair share of money and likely would not have seen the light of day as soon as they did were it not for Rings and Potter. In fact, three and a half years after its first installment, Percy Jackson is being given a second big screen treatment this August with Sea of Monsters.

Aside from The Hobbit: An Unexpected Journey, the remainder of fantasy movies haven't come anywhere near the heights of the aforementioned franchises. Even the more modest successes seem to be getting smaller (a far different dynamic from the growing success of comic book adaptations).

Wrath of the Titans, for example, dropped a precipitous 49 percent from its predecessor's domestic gross (worldwide receipts fared better and resulted in an overall global decline of 39 percent). 2006's Eragon? A very modest performer. 2007's The Golden Compass? A bomb that effectively killed one of its backing studios. The subsequent Narnia movies? Poorly strategized under-performers. The Conan the Barbarian remake? Let's not even go there...

Take the most recent example, The Hobbit: An Unexpected Journey. The film is an unquestionable success with a near-$300+ million domestic run and a possible $1 billion worldwide tally after the film's China release in February. Does its lower number of actual tickets sold compared to the Lord of the Rings films also reflect a change in taste for the broader mainstream audience? Or did the industry just expect too much? Again, that's another debate for another day. The point here is that even one of the genre's biggest recent successes, for any number of reasons, hasn't quite reached all of the performance levels that its own preceding series established.

Because of the genre's--and The Hobbit's own--recent history, all eyes will be on films like Jack the Giant Slayer, Oz: The Great and Powerful, Percy Jackson: Sea of Monsters, The Seventh Son (based on The Wardstone Chronicles novel series) and The Hobbit: The Desolation of Smaug this year. Whether the whole fantasy "thing" has been over-played or Hollywood simply hasn't gotten it as right as they could have, in either case, something else has been going on at the same time: its science fiction brethren has become much more prominent.

Where did the trend begin, and what does it mean for the future of both genres? Check Boxoffice.com on Wednesday for our thoughts and the conclusion to this article...

Do you think the fantasy genre has been over-exposed? Share your thoughts on the Boxoffice.com Forums.

Tags: The Hobbit: The Desolation of Smaug, The Hobbit: An Unexpected Journey, Wrath of the Titans, Clash of the Titans, The Chronicles of Narnia: The Lion, the Witch & the Wardrobe, The Golden Compass, Eragon, The Lord of the Rings, Harry Potter
Print