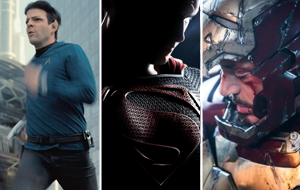 The first 2013 edition of our Forums' Most Anticipated Movies has arrived, and while a certain area of the chart remains consistent with past weeks, other notable films are beginning to make waves.

With the major 2012 holiday releases out of the way, our forum community is now looking ahead to what movies excite them the most in the new year. Creating some of the most noise: March's Oz: The Great and Powerful. Sam Raimi's fantasy flick leaped nine spots to crack the top 10 two months out from its release.

A few notable jumps outside of the top ten include the upcoming wide release of Zero Dark Thirty, which jumped from #18 to #11 last week, The Wolverine (up ten spots to #13) and A Good Day to Die Hard (taking #17 up from #30 previously).

In addition, The Hobbit: The Desolation of Smaug cracked the top five for the first time as it slowly but steadily moves up the chart. The second Hobbit movie was up three positions to #4 ahead of Thor: The Dark World. It still has some work ahead of it to catch the top three though.

Speaking of the top three, for the third consecutive week they remain the same. Iron Man 3 took the bronze medal, Man of Steel the silver, and of course, Star Trek Into Darkness held on to #1 for a fourth straight frame. The distance between Iron Man 3 and Man of Steel remained about the same while Trek actually increased the voting spread from last week between it and second place. Star Trek Into Darkness is the first film to claim #1 for four consecutive weeks since The Hobbit: An Unexpected Journey achieved that feat back in August (as part of a 7-week run at the top dating back to late July).

Now eligible for voting: The Amityville Horror: The Lost Tapes
No longer eligble: (no exits this week)

Tags: Star Trek Into Darkness, The Hobbit: The Desolation of Smaug, Man of Steel, Iron Man 3, Thor: The Dark World, Oz: The Great and Powerful, The Wolverine, A Good Day to Die Hard
Print