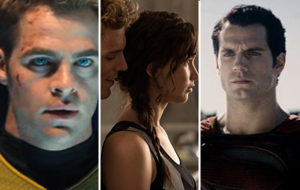 After several weeks of stagnant activity among the top five, this week's update on our forum community's most anticipated movies for the upcoming year sees some welcome movement. In fact, no films in the top six remained where they stood last week -- meaning Man of Steel's first reign at #1 came to an abrupt end.

For starters, a special mention goes to Oblivion. The Tom Cruise-led sci-fi flick from director Joseph Koskinski (Tron: Legacy) made the biggest leap of the week among notable films. The April 19 release jumped seven spots to #11 and nearly cracked the top ten, edging out Elysium which fell back two spots to #12.

The Hobbit: The Desolation of Smaug continues to rebound after falling out of the top five last week. The middle chapter of the trilogy bounced back two spots to land at #4. Meanwhile, Iron Man 3 dropped two positions to #5--one of the lowest showings that flick has had in some time.

The big news: Star Trek Into Darkness reclaimed the top spot after Man of Steel ended its four-week run there last week. Man of Steel only fell back one spot, though it was thanks to a tie. The Hunger Games: Catching Fire matched the Superman reboot vote for vote to split the runners-up position. Catching Fire was up two positions from last week in one of its best showings to date. We imagine the release of a number of new production stills recently has begun to amp up fan hype once again.

Notable exits this week include The Last Stand (#36) while Mama and Broken City failed to chart any votes during their release week.

Now eligible for voting: The Book Thief, No Good Deed and Ride Along
No longer eligble: Broken City, The Last Stand, The Little Mermaid 3D and Mama