close
The upcoming release of 'Hansel and Gretel: Witch Hunters' spurs the question... 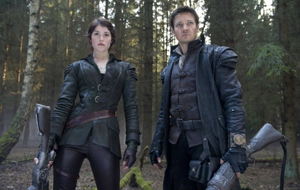 If nothing else, the goal of Number Crunch is to serve as a financial report card on where Hollywood has been while also cautioning the studios on where they're going. In this edition, it's time for the "fairy tale revival" to go under the microscope. And surprisingly, so far, the results aren't that bad.

The movement didn't begin with a good send-off in 2003. The Peter Pan re-imagining aimed for a big Christmas audience and instead was met with poor critical reviews and an even worse box office performance. Pulling less than $50 million domestically and reaching $122 million worldwide, the film failed to break even during its theatrical run when considering its $140 million negative costs (production plus marketing budgets). Granted, opening the week after The Return of the King wasn't a good strategy.

The next iteration would be 2005's The Brothers Grimm, which grossed just $105.3 million globally against negative costs of $115 million.

Fortunately, the track record has improved since then. Tim Burton was the next to step up to the plate, and he hit Charlie and the Chocolate Factory out of the park. That remake took in $206.5 million in North America and $475 million around the world. On a combined $210 million budget, the film was one of the biggest and most profitable hits of the summer of 2005.

The good news continued in 2007: Disney dived back into its roots with the live action/animation hybrid Enchanted. Led by excellent word of mouth and strong family business during the holiday season, it went on to garner $340.5 million worldwide--more than 2.5 times its $135 million budget. Enchanted stands as the second most profitable film on our list here.

2010's The Sorcerer's Apprentice fell into the trappings of a poorly strategized summer release, ultimately taking in a poor $63.2 million stateside. Overseas, the film performed much better but the overall global take of $215.2 million resulted in barely making back Disney's $195 million spent producing and marketing the Fantasia-inspired undertaking.

Two more films would have a say in 2010: Disney rebounded with a huge hit in Tangled, a film that broke out domestically with $200.8 million and finished its theatrical run with $588.8 million overall. The Rapunzel revival made 1.84 times its $320 million expenses, but keep in mind that a significant portion of that money was spent on the Mouse House's first iteration of the film--scrapped before going in the new, and ultimately final, direction which became the Tangled we all know.

Last up for that year would be the live action Gulliver's Travels. Not known as a hit, the film flopped in America with just $42.8 million. But--and hopefully you're noticing this theme--overseas results saved the day again with nearly $200 million made outside the United States. The movie pulled a modest 1.59 times its $150 million budget.

In 2012, Mirror Mirror offered the first Snow White re-telling and while the film had respectable legs, its $162.4 million take was just enough to put it in a grey area making 1.25 times its $130 million costs. A few months later, Snow White and the Huntsman took advantage of a summer release and several star names. The film was a respectable hit with $155 million here at home and $400.7 million in all--1.78 times its $225 million budget.

If you've noticed one film missing here, it's because we're saving it for last. The most profitable fairy tale revival was Tim Burton's Alice in Wonderland. The trifecta of Burton's, Johnny Depp's and Disney's names combined with the awareness of the story and the 3D craze established by Avatar three months earlier proved to be a powerful mixture for Alice. Taking in a massive $334.2 million domestically and $1.024 billion worldwide, Burton eclipsed the success of his own Charlie remake and ultimately claimed the most profitable film in our analysis. Alice in Wonderland made 3.66 times its $280 million budget.

With six films in the black, one in the middle, and three likely money-losers, it's a bit surprising that this new wave of "classics" being retold has been as successful as it has. What does it mean for the next attempt, though?

This weekend's Hansel and Gretel: Witch Hunters seems to lack most of the advantages carried by the successful films we've discussed. Witch Hunters--unlike any of the others--carries an R rating and makes no attempt to target a family audience. In addition, the January release makes it one of only three (alongside Alice and Mirror Mirror) to release outside of a major movie-going season. Lastly, marketing has attempted to corner the same niche audience that drove last summer's Abraham Lincoln: Vampire Hunter--an audience that wasn't very big domestically. That film failed to turn a profit after global receipts were tallied.

Online and social media buzz for Hansel and Gretel haven't been much to write home about either. While Paramount is no doubt hoping that Jeremy Renner's rising stardom will help sell the film, that's asking too much of him when considering the other disadvantages the film has to carry. Where Disney, Warner Bros. and Universal took care of the source material by backing their various hits with strong creative talent, appealing concepts, and focused marketing strategies, Witch Hunters feels like it's being dumped.

Boxoffice.com is currently predicting a $15 million opening and $35 million domestic total for Hansel and Gretel: Witch Hunters. With an unconfirmed production budget of $60 million and early estimates of that landing closer to $90 million after marketing expenses, once again, the weight is on the shoulder of international markets. If the film lands close to the $35 million domestic take that we project, the film will need to bank $100 million overseas in order to reach a clear profit before exiting theaters.

Granted, part of the business of movies includes making money in ancillary markets (Blu-ray, DVD, On-Demand, etc.). But aren't we walking on dangerous ground when the standards are lowered to the point of being okay with minimal or non-existent profit margins by the time a film has played out in theaters?

Stay tuned to Boxoffice.com on Wednesday when our final opening weekend prediction for Hansel and Gretel: Witch Hunters will be posted.

* = Broke even or lost money theatrically

Special thanks to Edward G. for inspiring this edition of Number Crunch.