'A Good Day to Die Hard': What Went Wrong? 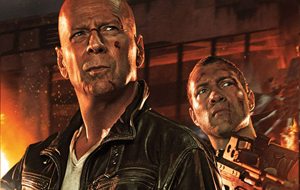 Before Thursday, it was widely expected that A Good Day to Die Hard would win its debut weekend by a significant margin. Despite a heavy marketing campaign that tried to pitch the fifth entry of the 25-year-old franchise as 2013's first "event" film, the flick was neck-and-neck with the romantic drama Safe Haven on Friday (after outright losing to it, as expected, on Valentine's Day).

For the 3-day weekend, Boxoffice.com is projecting a $23.5 million take for Die Hard 5, but that's not enough to say that first place is locked when considering that Identity Thief is projected at $22.5 million and Safe Haven itself should be close behind with $22 million.

What happened? Take your pick from the crop of reasons. The franchise had been dormant for almost seven years. Live Free or Die Hard received decent word of mouth in 2007, but it still didn't reach the heights of its predecessors. There simply wasn't a lot of demand for another movie--not even from die hard fans (pun intended).

This is yet another example of a franchise being poorly handled. Fox hired the writer of X-Men Origins: Wolverine and the director of Max Payne--two widely panned films by fans and critics alike--to "revive" Bruce Willis' signature series. Even the marketing campaign dropped the ball at times with posters looking like discarded promo material from the last film. Awareness was high, though, thanks largely to the movie's big Super Bowl push. People knew about this movie, they just didn't care.

And then came the domino effect: social media and the Internet in general have been tearing the film apart this week. Critical reviews are in the cellar (sitting at 17 percent on RottenTomatoes.com with a paltry 4.2 average rating), and word of mouth itself appears to be disappointing too. Most complaints seem to revolve around--you guessed it--a sloppy script and contrived direction. In the age of social media and high ticket prices, that's a one-two punch for almost any movie.

Financially, even when factoring out the film's estimated $820k late night debut on Wednesday/early Thursday, A Good Day to Die Hard drew less business throughout all of Friday than on Thursday post-midnight. That's not a good sign.

Some may be quick to say that Bruce Willis isn't the action star that he used to be, but the blame is anything but his. The film will still far exceed the disastrous openings of Arnold's The Last Stand and Sly's Bullet to the Head. Overall, A Good Day to Die Hard's domestic (and possibly international) run looks to be comparable to that of The Expendables 2 (which wasn't even Willis' film to carry). Audiences still want to see Bruce--something we'll probably continue seeing evidence of with this year's G.I. Joe: Retaliation and RED 2.

Instead, the blame is on the creative and business decisions behind this entry. No one is perfect, but it didn't take a genius to understand there was no room for risk-taking with a fifth installment of an aging series that was past its peak. With this disappointing debut, the Die Hard franchise is even further from stage center than it's ever been.