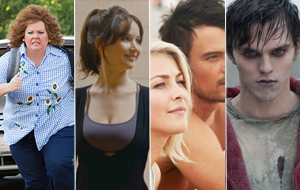 Friday Update: The final domestic market gross for February rang in at $616.32 million.

January began the year in a big way with $827 million, but February will end on a more sour note. We're projecting a $611 million domestic market gross for the month once Thursday's numbers are reported. That will bring 2013's domestic market cume to $1.438 billion--a 12.8 percent decline from 2012's $1.649 billion between January and February.

The month itself will come in as the lowest grossing February since 2002 ($592.51 million) and marks a sharp 25.3 percent year-to-year monthly decline. 2012 delivered a banner February with The Vow, Safe House, Journey 2, Act of Valor, and Chronicle leading a massive $817.97 million month.

Where three of those films topped $100 million domestically, the only February opener to crack $60 million this year was Identity Thief ($95.8 million through Tuesday).

Oscar-winner Jennifer Lawrence and the hailed ensemble cast of Silver Linings Playbook helped that flick impress on its own. Warm Bodies and Safe Haven also boasted strong sleeper runs. But the month as a whole suffered from a lack of must-see new releases. The domestic disappointment of A Good Day to Die Hard was a significant factor.

The good news is that March looks poised to pick things back up: Disney will launch Sam Raimi's Oz: The Great and Powerful next weekend (a recipient of positive buzz so far), followed by DreamWorks' The Croods on March 22 and Paramount's G.I. Joe: Retaliation on March 29.

In between those heavyweights will be titles such as The Incredible Burt Wonderstone, Admission, Olympus Has Fallen, and The Host as they also vie for success. While it's unlikely that any of these matches the mammoth performance of last year's The Hunger Games, solid runs driven by positive word of mouth from the majority of them could quickly turn 2013 back around in time for the lead-up to summer. Otherwise, the summer market will have a lot of work to do.

Stay tuned to Boxoffice.com for continuing analysis on these and other upcoming releases.