close
Our Forums' Most Anticipated Movies for the Week Ending February 28, 2013 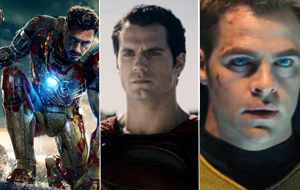 After four straight commanding weeks at the top spot, Star Trek Into Darkness finally ... won by just a hair.

That makes five straight weeks at #1 for J.J. Abrams' upcoming sequel, besting it's personal streak of four weeks back in December. Into Darkness is the first movie to claim first place since The Hobbit: An Unexpected Journey claimed it for seven weeks in a row during July and August last year. (For those wondering, the record is 12--a streak held by The Dark Knight Rises, which it achieved on two separate occasions between 2011 and 2012.)

That said, the top three is finally interesting again. Man of Steel and Iron Man 3 broke their 3-week stalemate with the former leap-frogging into second place. Both films increased their numbers of votes from last week by a significant margin, though. Iron Man 3 benefited from the release of new promotional character posters this week. Meanwhile, Man of Steel has started generating unconfirmed rumors of very positive buzz from early screenings.

The Hunger Games: Catching Fire rebounded with a jump from #9 to #6, slightly behind The Hobbit: The Desolation of Smaug which was up one tick to fifth place. Thor: The Dark World remained in fourth for another week.

Of this weekend's four new wide releases, only Jack the Giant Slayer charted and will exit at #38.

Most Anticipated Movies for the Week Ending February 28:

Now eligible for voting: Turkeys
No longer eligible: 21 and Over, Jack the Giant Slayer, The Last Exorcism Part II, and Phantom