close
Our forums' most anticipated movies for the week ending Thursday, February 7, 2013

Forum Buzz: Do the Top 5 Flinch as 'Fast & Furious 6' Accelerates Up the Chart? 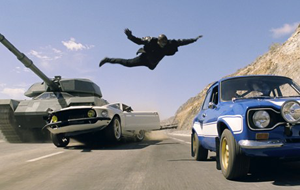 Hot off the incredible buzz generated by its Super Bowl spot, Fast & Furious 6 leaped a huge 34 spots last week and fell just 3 votes short of the top 10. Ranking in 11th place, the debut of the franchise sequel's first footage and subsequent online trailer release have been hot topics across social media and our own Forums.

Next month's Oz: The Great and Powerful also benefited from increasing buzz. The Sam Raimi-directed fantasy flick was up from #14 to a tie in 9th place last week, just a few days after several new character posters and clips made their way online.

Alas, the story at the top of the chart didn't change much. Star Trek Into Darkness retained the #1 position for a second straight week (seventh overall). The Hunger Games: Catching Fire stayed in place at third, but Man of Steel lost ground on Iron Man 3 which resulted in the latter overtaking it for the runner-up spot. Thor: The Dark World rounded out the top 5.

Notable exits include Side Effects (#22) and Identity Thief (uncharted in its final week).

Most Anticipated Movies for the Week Ending February 7:

Now eligible for voting: Lego, Need for Speed, and Robocop
No longer eligible: Identity Thief, Mr. Peabody and Sherman, and Side Effects