close
Our Forums' Most Anticipated Movies for the Week Ending February 21, 2013 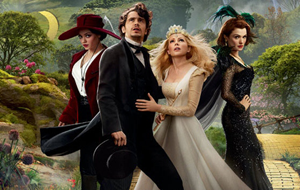 This week's tabulations for our forums' most anticipated movies saw a major increase from Oz: The Great and Powerful two weeks out from release. The Sam Raimi-directed Disney pic leaped six positions to land in the top five for the first time.

Counter-balancing that film's ascent was the continued decline of The Hunger Games: Catching Fire. November's highly anticipated sequel slipped another three spots down to #9 this week. That represents the film's second lowest ranking since its eligibility began (having ranked #10 in our December 13, 2012 update). However, with a new poster debuting at the end of last week, it's possible we see the title rebound in our next update.

Meanwhile, the top three again go unchanged. Star Trek Into Darkness maintained a comfortable first place lead for the fourth consecutive and ninth overall week. Iron Man 3 and Man of Steel rounded out the second and third spots, respectively, for a third straight week--although, the voting remains close between the two.

This past weekend's releases, Snitch and Dark Skies, were uncharted in the final week.

Most Anticipated Movies for the Week Ending February 21: