Is May Overcrowded with 'Iron Man 3', 'Star Trek Into Darkness', 'Fast & Furious 6' and 'The Hangover Part III'? 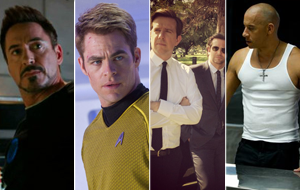 Remember 2007? That year's summer kick-off month of May boasted what may have been the highest profile lineup of releases in modern--or any--box office history. Spider-Man 3, Shrek the Third, and Pirates of the Caribbean: At World's End each followed such massive blockbuster predecessors that, despite none of the three-quels quite reaching expectations, they still combined for a multiple record-setting May.

The years since have seen their fair share of big movies in May, but none equal to what is now lovingly referred to among the box office community as "The Big Three".

2013 is getting ready to deliver a very packed May itself, though. The month's four biggest releases represent follow-up flicks whose predecessors each took in at least $200 million domestically. Two of them stood out with great-to-excellent word of mouth (Star Trek and Fast Five) while the other two were generally regarded as hits that didn't live up to the hype (Iron Man 2 and The Hangover Part II).

Granted, in the case of the upcoming Iron Man 3, a little movie called The Avengers released in between Tony Stark episodes and makes this less of an apples-to-apples comparison. Adding on a 3D price advantage that 2010's sequel didn't have, Iron Man 3 will be hard-pressed not to top $300 million domestically again. Overseas markets likely have even more advantage for some box office expansion versus the previous Iron Man sequel.

Two weeks later, Star Trek Into Darkness stirs things up. Compared to surprise blockbusters like the first installments of the Pirates of the Caribbean, Transformers and Iron Man series, it stands to reason that a domestic and overseas gross increase over the 2009 Trek's $385 million global tally ($257.7 million domestic) is in store. Due for a bigger opening, and possibly bigger numbers overall, Into Darkness also adds 3D to its arsenal. With all eyes on director J.J. Abrams over recent news, the franchise could a hit new peak all over again if the elements fire on all cylinders.

And then there's Memorial Day weekend, which has some of us still scratching our heads over. Warner Bros.' The Hangover Part III is slated to open against Universal's Fast & Furious 6 during what is typically the biggest weekend of the year. Despite the Wolfpack topping Dom, Brian, and the gang by almost $45 million domestically (but nearly tying in international markets), the advantage may be on the side of Fast & Furious 6 this time.

While a huge financial success, The Hangover Part II didn't deliver the kind of "water cooler moment" word of mouth that the first chapter achieved in 2009. Can this franchise keep up the $200+ million domestic runs with what may be a more modest opening than the previous film's record debut (best ever R-rated opening)? Word of mouth for the third film itself will probably determine that, especially with the movie fighting for the male audience with...

Fast & Furious 6. This franchise couldn't be in a more opposite position. The fourth entry revitalized the series with a new image in 2009, but the fifth really broke the series' mold in terms of opening weekend and holding power through word of mouth. The racing-turned-heist saga has never been as widely popular as it is now, and the Super Bowl debut of this sequel's first footage went over incredibly well with viewers and online audiences.

Although Fast & Furious 6 and The Hangover Part III appeal heavily to men, both may still succeed--but Universal could be looking at another studio opening weekend record with Vin Diesel and the gang. The Hangover Part III, unfortunately, may have to fight a little to win back lost fans. Was not advertising the comedy during the big game a misstep in that regard? Probably not. Keep in mind that the second Hangover didn't advertise during the game either, although WB had at least launched a teaser before then. We can probably expect Part III's first trailer within the next few weeks.

We're obviously excluding The Great Gatsby and Epic from this analysis as they will target different audiences and likely be able to co-exist with the big dogs. That leaves four major sequels in May alone that could potentially hit $200 million domestically (with one or two being favorites to reach $300+ million). And with three months to go, it's entirely plausible that at least one of the Memorial Day weekend releases gets moved up or back by a few days (hypothetically, opening Hangover III the week after would duplicate the successful strategy of the first movie).

Paramount, Warner Bros., and Universal in particular have a lot riding on their May releases as they represent some of the respective studios' key tent pole franchises right now. After a few hit-and-miss summer kick-off months that relied on the success of one or two bona fide blockbusters, 2013's may not *need* an Avengers-sized hit in order to challenge records.

But, as the story goes, they have to live up to the expectations of an industry watching four big franchises go head-to-head, which is to say nothing of the anticipation of fans out there who will ultimately determine whether each movie is worth seeing again before moving on to the next summer blockbuster. Might we end up remembering May of 2013 as the month of "The Big Four"?

The Star Trek Into Darkness trailer: