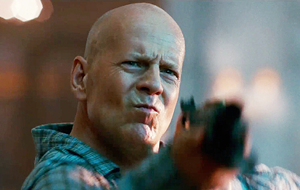 We often critique franchises whose peak of success has come and gone--whether creatively, financially, or both. Usually that peak comes early on. Sometimes it's a slow crescendo into greatness.

This weekend sees the release of the latest installment of the Die Hard franchise. Bruce Willis is now in rarefied territory as he reprises the character of John McClane for a fifth time. That exceeds (for now) the number of times Harrison Ford has portrayed Indiana Jones, Tom Cruise as Ethan Hunt, Matt Damon as Jason Bourne, and Vin Diesel as Dominic Toretto. If you can believe it, he's just two shy of Roger Moore's seven-film run as James Bond (Connery did six...officially).

Willis has firmly cemented his place in the history of action franchises. The question is: what is the identifiable point between a justified, organic expansion of a franchise and a cash-grab? Many of us hold firmly to the notions that all good stories must end and that good business decisions should be fueled by stronger creative ones.

There are amendments to every rule, though. Fast Five proved it. Before 2009, most had written off the Fast and the Furious series as stalled with nowhere else to go. Enter Justin Lin, who helped give the series back some credibility among fans with Tokyo Drift and has since shepherded every movie in the franchise. With Fast & Furious and Fast Five, he and the crew delivered two sequels largely considered to be improvements on everything the series had done before them. Fast Five reaped those rewards with a huge $629 million global gross and the series' best reception yet.

J.J. Abrams and Brad Bird similarly revived the Mission: Impossible saga. Sure, the third film (directed by Abrams) was a disappointment at the box office, but it also had to shoulder the stigma of its predecessor (not to mention Tom Cruise's media shenanigans). Five-and-a-half years later, Ghost Protocol erased the third film's financial shortcomings with strong word of mouth and critical reviews. $692.5 million later, the series has never been stronger.

The darker side of sequel-ized ambitions can be seen in films like The Bourne Legacy. With no Matt Damon and a story preconceived by some as forced, the follow-up to the "conclusion" of Ultimatum saw a sharp 37.5 percent drop in global box office sales. Changing up the lead actor surely played a large role in the declining interest for the series.

Indiana Jones is a tougher cookie to crack. Kingdom of the Crystal Skull benefited from 19 years of anticipation plus big repeat business from families in 2008. Still, fans haven't been shy about throwing it under the bus, and--despite an excellent $786.6 million global gross--we still aren't much closer to getting a fifth entry from Lucas and Spielberg.

What about Die Hard, though?

Entering 2007, a lot of skepticism surrounded the idea of a fourth movie (made worse by its controversial PG-13 rating). Willis wasn't getting any younger and the franchise had been absent from theaters for 12 years. Nevertheless, Live Free or Die Hard rode a solid marketing campaign and capitalized on demand that resulted from several disappointing movies earlier that summer. While beating most expectations, it wasn't a huge break-out. Selling fewer tickets domestically than the first three McClane flicks, Live Free only topped With a Vengeance by $17.4 million globally. After more than a decade's worth of inflation and market expansion, shouldn't its run have done more to impress?

That film's place among its predecessors has a big question mark next to it in the same vein as Indy's Crystal Skull. While it was a solid hit at the time, it didn't break the mold in the way that Fast Five and Ghost Protocol showed was possible with the right creative team.

Will A Good Day to Die Hard have to pay the price for that? Or is Bruce himself still enough reason for audiences to help churn out at least one or two more blockbusters in the series? The overseas market will have a major say in that this time, but one thing is historically certain: if Fox does pursue a sixth movie, they can't keep riding on the coattails of the first three.

The trailer for A Good Day to Die Hard: