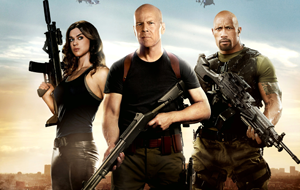 It's been clear since the eleventh hour delay of G.I. Joe: Retaliation from a planned 2012 release that Paramount has some work to do with the franchise's image. Last year's first trailer barely highlighted Channing Tatum's presence (leading some to speculate his character wouldn't be involved in most of the story). Perhaps not coincidentally, while Tatum was driving three box office hits last year and proving his ability to draw, the delay was announced.

The 2009 film's cast had already been gutted and replaced by more male- and action fan-friendly names like Bruce Willis and Dwayne "The Rock" Johnson. As the sequel's March 29 release approaches, we're taking a look at how Paramount's strategy is working so far.

The good news: Retaliation boasts a 96 percent "want to see" score from more than 48,852 voters on Flixster. That's way ahead of A Good Day to Die Hard's 19,541 votes at the same time. It also leads the final totals of Taken 2 (30,637), The Expendables 2 (35,000), and last year's Wrath of the Titans which opened on the same March weekend and closed with an awful 73 percent score from 18,000 voters. Granted, opening one week after The Hunger Games didn't do that one any favors.

Making matters worse is that Retaliation has a positive-to-negative tweet ratio lower than all of those films--except for the latest Die Hard flick.

Not much time remains, but most of these comparison films lacked significant appeal to younger viewers. That's going to be an area of strength for Retaliation, although it won't have a monopoly on the kiddie audience this time thanks to DreamWorks' The Croods opening one week earlier. If Paramount continues showcasing more of Tatum in addition to Willis and Johnson over the next few weeks, general audiences--action fans included--may be willing to give this revamped sequel a shot. It's definitely not a safe bet, though.

The Boxoffice.com team is currently predicting a $48 million opening and $125 million domestic total for G.I. Joe: Retaliation. Keep checking back for further analysis and revised predictions in the weeks ahead.