close
Will March's kick-off movie set the bar for a big month, or merely serve as an opening act for 'Oz'? 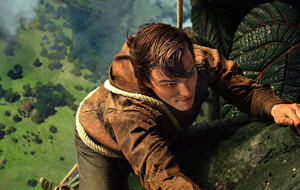 One of last year's more notable release shifts was that of Bryan Singer's Jack the Giant Slayer (then titled Jack the Giant Killer). At one time slated for a summer release on June 15, 2012, Warner Bros. decided to push it all the way back to March 1, 2013. The hope, at the time, may have been to steer away from Snow White and the Huntsman--an eventual box office success. Whatever the reasoning, the studio's luck with the modernized fantasy only keeps getting worse.

For a five-day tracking period that began on February 1 (four weeks from Jack's release), the flick totaled only 536 tweets with a 9.8-to-1 positive-to-negative ratio. That's concerning for a costly fantasy film with a not-unrecognizable cast, a well-established director, and the hope of culling fans from series like The Lord of the Rings (shamelessly evidenced by the decision to have Sir Ian McKellen supply the trailer's voice-over).

How does Jack the Giant Slayer stand up against similar movies during their corresponding five-day Twitter performances one month out from release? See for yourself below. (Note: Rango is included as it opened on the same weekend in 2011.)

Not only is Jack currently tracking behind the worst performer of that bunch (The Three Musketeers, which opened with an $8.7 million weekend), the more troubling sign is how much it trails *another* big-budget fantasy movie releasing one week later on March 8, Oz: The Great and Powerful.

During the exact same five-day period, Oz amassed 3,402 tweets. The quality of those tweets was 5.47 times stronger than Jack's at 53.6 positive-to-1 negative versus 9.8 positive-to-1 negative. Adding salt to the wound: Oz boasts slightly more than 5 times the number of Jack's Facebook fans.

Granted, Oz's Twitter performance was somewhat skewed due to that movie's Super Bowl ad, but even two days before the game it was generating 2.7 times more activity on the social media platform. The disparity between positive and negative tweets was, again, even larger.

Boxoffice.com is currently predicting a $23 million opening for Jack the Giant Slayer. With just over three weeks before release, a last minute marketing surge could help raise awareness. Leading man Nicholas Hoult will be fresh off the success of Warm Bodies, and Bryan Singer is certainly a recognizable name despite this being his first directorial effort in more than four years.

But if awareness is already there and interest itself is struggling, then odds are permanently stacked against this latest in the line of fantasy re-imaginings. Being one of four new wide releases on March 1, plus with Disney's Oz tracking well and DreamWorks' The Croods opening March 22, Jack needs those magic beans to start turning the buzz in his favor.

The Jack the Giant Slayer trailer: