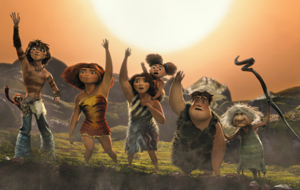 Three weeks from this Friday, DreamWorks' latest animated venture will hit theaters. The Croods marks their first spring season offering since 2010 when How to Train Your Dragon achieved critical acclaim and a memorable box office run for an original animation.

Chris Sanders--half of Dragon's writing/directing duo--returns behind the "camera" and script for The Croods, so expectations are very positive. What does social media have to say so far?

During the five-day period starting Friday, February 22, The Croods totaled 1,813 tweets. By comparison, DreamWorks' Rise of the Guardians pulled just 867 tweets during the comparable period one month out from its November 2012 release.

A similar note should also be made for the more comparable spring-time release of The Lorax. It's five-day tracking frame saw more than 9,741 tweets--but the final two days accounted for over 86 percent of that activity thanks to the movie's Super Bowl ad. (FYI: Fox and DreamWorks decided not to push The Croods during this year's big game.)

Looking at other March/April animation releases, The Croods is ahead of the curve with 2011's Rio and 2010's Dragon having totaled 361 and 704 tweets, respectively. Twitter's user base has since increased significantly, but that's still good news for Croods.

Original animated films can be tricky, though. The buzz for Croods seems to be building in the way Fox and DreamWorks would hope for, but March will be competitive for younger audiences and families. Disney's Oz: The Great and Powerful has been the recipient of solid early buzz and opens two weeks before The Croods--meaning the former gets first crack at 2013's ignored family market. G.I. Joe: Retaliation will then aim for the young male demographic one week after The Croods opens.

The Boxoffice.com team is currently predicting a $40 million opening and $150 million total domestically for The Croods. Stay tuned in the coming weeks as we continue to track the film's buzz with further analysis and updated predictions.

Alex Edghill contributed to this article

The trailer for The Croods:

Tags: The Croods, How to Train Your Dragon, Rio, The Lorax, Ice Age: Continental Drift, Madagascar 3: Europe's Most Wanted, Rise of the Guardians
Print