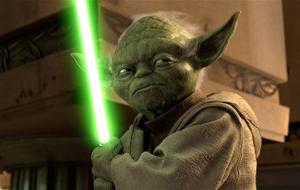 One rumor suggested that the first may involve a solo tale for Yoda. While that is unconfirmed, Iger did say that Lawrence Kasdan and Simon Kinberg are working on new Star Wars movies parallel to the current pre-production of Star Wars: Episode VII. Oh, and the plan is to release these standalone movies sometime during the six-year period (beginning in 2015) between the upcoming Episodes VII, VIII, and IX.

We all know how valuable a brand Star Wars is, and that's what made the company's purchase of Lucasfilm such a smart move for all parties involved. That said, with no less than four--and potentially as many as five or six--Star Wars-related movies hitting theaters over the course of six years, the general audience may burn out on the franchise's rebirth very quickly. This kind of plan is a different ballgame than the cross-platform success Star Wars has seen over the years through the Clone Wars television series, not to mention numerous books and video games.

Sure, the fans will eat up these standalone movies. Maybe that's the plan. But Disney would be well-advised to let the series hold on to as much of its cinematic "event" status as it possibly can for the foreseeable future. Remember, the Clone Wars feature film didn't exactly make waves at the box office in 2008. Episode VII is a shoe-in for blockbuster gold--especially if J.J. Abrams and writer Michael Arndt knock it out of the park--but it still has to bring back the mainstream moviegoers who ditched the series during the prequels' run.

Do the standalone movies risk undercutting and diminishing what Abrams and co. are trying to do for the series? Or is this simply comparable to what Marvel has already achieved by releasing standalone character movies between Avengers flicks? It's very clear that Disney is hoping to duplicate that strategy with the Lucas brand, but it's very hard to capture lightning in a bottle twice and historically unlikely that the spin-off flicks will live up to the box office potential of the main saga (anything titled with an "Episode" designation).

The talent is there to make it work for fans, but hopefully the studio isn't trying to bite off more than it can chew with general audiences.