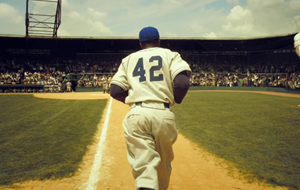 Writer/Director Brian Helgeland's 42 is scheduled to open on Friday, April 12 (opposite Scary Movie 5) and despite the decidedly rough history of baseball-themed movies at the box office, the film is--forgive the pun--knocking it out of the park across social network metrics.

From March 15-19, 42 was responsible for 8,454 tweets with a stunning 54.8 positive-to-negative ratio. The Twitter activity was 122.4 percent higher than Moneyball during the same point in its 2011 release cycle and a whopping 444.7 percent ahead of last year's Trouble with the Curve. In fact, it was the fifth most talked-about movie on Twitter yesterday (March 20).

Flixster users are keeping with the trend as well. 42 holds a strong 97% "want to see" score from 5,740 fans currently. While the actual number of voters may seem low, that's a respectable total for a non-tentpole drama one month out from release. By comparison, Trouble with the Curve had a 90% score from 5,246 voters on the day before its release. 42 is likely to wind up closer to Moneyball's 88%/12,652 tallies before April 12.

What's behind the sudden charge? The winding up of the promotional cycle certainly has a lot to do with it. It was just announced this week that the film would be hosted by Kansas City for advance public screenings going to benefit the Negro Leagues Baseball Museum. In addition, with baseball season itself gearing up (and the World Baseball Classic having just ended), there's been some great marketing synergy in place for Warner Bros.' push. (On a somewhat unrelated note, 42's Harrison Ford has had recent media exposure thanks to Star Wars: Episode VII rumors.)