close
This April, a former box office heavyweight squares off against a reimagined cult classic. 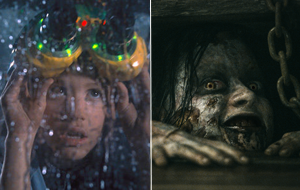 They're two films that couldn't be targeting more widely different audiences. Less than one month from release, the 3D re-release of one of the biggest films in history will square off against the remake of a cult classic.

On paper, the clear favorite is Steven Spielberg's Jurassic Park 3D. Twenty years ago, that film wowed audiences on its way to becoming the second-highest grossing film in North American history and the biggest ever worldwide. The all-time charts have since changed dramatically, but Jurassic's place in the hearts of moviegoers across all ages hasn't lost its splendor.

But after a number of modest-to-disappointing domestic box office runs for 3D re-releases like Titanic and Star Wars: The Phantom Menace, it's clear that the 3D re-release craze--if there ever was one--is gone.

Now, Evil Dead--the remake of Sam Raimi's 1983 original that grossed $2.4 million and never played in more than 128 theaters--might be positioned to fulfill a box office upset of David and Goliath proportions.

One month from their April 5 releases, here's how the players weigh in so far:

Jurassic Park 3D was responsible for 1,469 tweets during a five-day period beginning last Friday. That's 82.2 percent below Titanic 3D and 86 percent off The Lion King 3D when it comes to Twitter activity during comparables points in their release cycles. It's also 40.8 percent off from Phantom Menace 3D.

In fact, Evil Dead's current Twitter performance is strong enough to make it one of the six most tweeted-about movies we're presently tracking.

Not every horror remake turns out to be a hit (see 2011's The Thing and Fright Night which debuted to less than $9 million), but Evil Dead is tracking leagues ahead of those films. With Jurassic Park 3D now trending behind 3D re-releases that opened to $17.3 million (Titanic 3D's three-day opening) and $22.5 million (Phantom Menace 3D), it's becoming evident that the diametrically opposed histories of these movies won't be a factor in 2013.

Could Evil Dead open in first place ahead of Jurassic Park 3D during April's first weekend? Or will Steven Spielberg's classic convince moviegoers it's a worthy family event more along the lines of The Lion King 3D? Right now, all bets are off.

As of last weekend, the Boxoffice.com team was predicting a $20 million opening and $47 million domestic haul for Evil Dead while Jurassic Park 3D stands at $25 million and $55 million. We'll be keeping close tabs on both flicks during the coming weeks, so stay tuned for further analysis and prediction updates.

Alex Edghill contributed to this article.