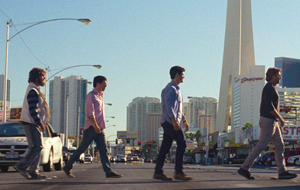 The Wolfpack is definitely back.

Despite very modest word of mouth for 2011's blockbuster sequel, buzz for The Hangover Part III kicked into high gear over the last few days with the release of the film's first trailer late last week.

This entry has already been the target of speculation because of not only the previous installment's decline in audience approval from the original but also because the "trilogy finale" opens head-to-head with another highly anticipated summer flick on Memorial Day weekend: Fast & Furious 6.

Some have even criticized Warner Bros.' lack of marketing for this sequel so far, but those skeptics have now been silenced. So far, the studio should be quite pleased.

Facebook is where the magic is really happening, though: The Hangover Part III increased its fan total by an astounding 2.88 million--a huge 14.8 percent leap--during those first three days of the trailer's release. FYI: through March 12, that figure is up to a 15.5 percent increase, and counting. By comparison, Fast & Furious 6 gained 29,555 fans (a 0.1 percent increase) during its three-day window.

Overall, Todd Phillips' three-quel has led all films currently being tracked in both Twitter and Facebook metrics since last Friday.

While The Hangover Part III's 5.3-to-1 positive-to-negative tweet ratio does leave something to be desired, the strong momentum in activity on Facebook at least indicates fans are liking what they're seeing and/or they're willing to give the franchise another chance for its supposed swan song.

Follow Boxoffice.com in the coming weeks as we continue to analyze The Hangover Part III's potential, including the release of our first domestic predictions for the film.