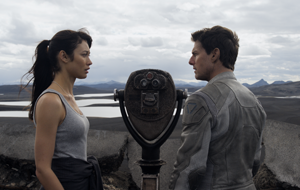 April's relatively quiet release schedule means that a lot is hinging upon the success of one or two films. Arguably the most important one of those will be Oblivion. It's a movie not quite positioned as a summer release but one that could easily continue making the case that April will eventually become "the new May".

Oblivion has some work to do, though. Four weeks out from release, its Twitter activity is alarmingly slow. This may be attributable to the fact that it is between promotional cycles. Still, the Tom Cruise-led science fiction title pulled 603 tweets over the last five days. While that is 108 percent ahead of Jack Reacher's activity during the same time, it pales in comparison to similar titles.

The news gets a little better over on Flixster and Facebook, but not by enough to erase the disappointing early Twitter numbers. With 85,340 Facebook fans through March 26, Oblivion is on par with John Carter and far behind Looper, Prometheus, and Tron: Legacy.

With the marketing emphasizing selling points like "from the producer of Rise of the Planet of the Apes" and "from the director of Tron: Legacy", Apes is probably a stronger comparison point. Lacking the existing online-driven fan bases of Tron and Prometheus means that Oblivion has to rely more on Cruise's name and the visual appeal of the movie itself. Granted, Apes had decades of fans and brand name recognition that also helped its cause for early buzz.

Oblivion's strong points rest in the fact that April has little competition. G.I. Joe: Retaliation will be several weeks deep into its run by April 19 and, even with a successful re-release, Jurassic Park 3D isn't expected to hang around long enough to be a major player at that point.

Looking back at Twitter, Oblivion's positive-to-negative comment ratio is a respectable 10.4-to-1 (way ahead of Jack Reacher's 1.6 and Prometheus' 5.6). Apes pulled a similar 10-to-1 ratio.

Nevertheless, opening two weeks before Iron Man 3 may be the biggest concern. Audiences have shown a tendency to wait for the blockbusters they know they want to see. That phenomenon often causes a lull in the market regardless of how appealing a movie might be on paper. Oblivion has Cruise, Morgan Freeman, and a large visual scope but the lead actor's consistency at the box office isn't what it used to be (see Rock of Ages and, to a lesser extent, Jack Reacher). The latter (being visual scope) has become so commonplace in blockbusters that a film usually needs a stronger angle to rely on.

Banking on a strong final promotional push with aid from IMAX tickets and Cruise returning to the sci-fi genre (where he's had a lot of success), the Boxoffice.com team is currently predicting a $45 million domestic opening and $120 million total for Oblivion. We'll continue to cover the film's buzz with updated analysis and predictions in the weeks ahead.