close
Six weeks from the start of summer, the industry is poised for a massive kick-off month. 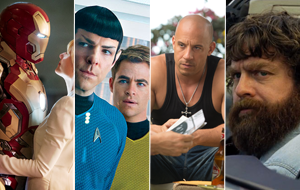 Benchmarks are hard to live up to. The new standard for a May blockbuster was birthed last year when Marvel's The Avengers broke a litany of box office barriers.

Now, 2013's lucrative summer season is approaching with some among the industry--and its fans--skeptical that this May can't measure up to last year's performance.

Before we begin to tell you why, keep one thing in mind: quality is ultimately king. If audiences aren't happy with the product they're given, they won't keep showing up after big opening weekends. They'll opt to catch up on Redbox titles and Netflix queues, or simply forego movies completely to enjoy the seasonal air. Exhibitors are acutely aware of that fact because it's a bigger disadvantage for them than it is for the studios. Last May, post-Avengers, was also a prime example of that stark reality.

So, let's revise the original wording: this year's market *can* measure up. The next question is "will it?"

For all the praise 2012 receives, many overlook some serious low points throughout the year. While Avengers dominated the world last May (and some of June), the only May film to open after it and not grossly disappoint Hollywood bean-counters was Men In Black III. Even that title barely avoided the label of disappointment thanks to good word of mouth after a modest opening weekend.

2013 may not have a potential $623.8 million domestic grosser to kick off summer, but it doesn't need one. To paraphrase Moneyball and the principles behind baseball's sabermetrics, the success of The Avengers can be recreated in the aggregate.

In fact, that's exactly what we think will happen.

Based on early indicators, we fully expect Iron Man 3 to top the $312-318 million domestic range of its direct predecessors (to say nothing of the likely overseas expansion). May probably won't open as thunderously as it did last year but, unlike 2012, this May won't fail to get on base after the lead-off man.

One week later, The Great Gatsby aims to counter-program by reeling in adult audiences. The potential of that release is still up in the air, but it isn't for the one on May 17...

Star Trek Into Darkness has been one of the most widely buzzed-about movies online for nearly four years. With J.J. Abrams recently coming on board to next helm the new Star Wars movie, interest in what he and his team have been brewing with Trek has only skyrocketed. Like Iron Man 3 before it, this film adds 3D to the box office arsenal. As well as the 2009 reboot was received by general audiences, Into Darkness would be hard-pressed *not* to match or exceed its $257.7 million domestic box office success.

For those counting, that would mean the first two major tentpoles of May are already expected to combine for no less than $600 million--not far off from The Avengers' tally. And we're only half way through May's squad of key players.

One week after Trek comes the most intriguing box office weekend of 2013. Memorial Day is typically the biggest frame of any year by default, but the highly competitive openings of Fast & Furious 6 and The Hangover Part III make this year's holiday weekend a potential record contender. If those films can post strong enough openings in combination with the holdovers capitalizing on good word of mouth, December 2009's record market weekend of $260 million may not be safe.

The crossover appeal to male audiences between the Fast and Hangover series could cancel out potential for the former to expand on Fast Five's $209.8 million domestic take. Ditto goes for the latter's ability to match the second Hangover's $254.5 million. Still, neither of the new sequels have to touch those numbers to be considered hits. Let's project that the two combine for at least $375 million in North America. In tandem with Iron Man 3 and Trek, May's "big four" would be well-positioned to rake in over $1 billion between them.

Again, we're not even counting the contributions of The Great Gatsby, Tyler Perry's Peeples, or Epic.

For comparison, May 2012's five key domestic releases (Avengers, Dark Shadows, Battleship, The Dictator, and Men In Black III) combined for $1.007 billion. The calendar month itself saw $778.9 million from those five and $1.025 billion overall (including figures from April's mostly disappointing holdovers).

One film drove all of those numbers. This year, the wealth will be spread more evenly--and that's good news for studios and movie fans alike. On paper, this May has something for everyone with a stacked lineup of big franchises. And if May 2007 taught us anything, it was that records can be broken even where any potential of overcrowding or disappointment in quality exists.

After May, the summer will continue with a barrage of tentpole movies. Some will hit, some will strike out. That's a statistical and historical guarantee. But if Hollywood delivers on the promise of these big marketing campaigns for May releases, audience goodwill could spill over into the dog days with big names like Will Smith, Superman, Pixar, Despicable Me 2's Minions, Channing Tatum, Johnny Depp, and Wolverine (among others) yet to come.

They have to deliver the goods on their own but, when it comes to May, 2013 doesn't need The Avengers. Having one of them certainly helps, though.

Keep checking Boxoffice.com in the weeks and months ahead as we continue to analyze this summer's highest profile (and some not-so-high profile) releases. You can also check out our Long Range Forecast for detailed predictions, updated weekly.