close
Does 2013's sluggish start have an end in sight? 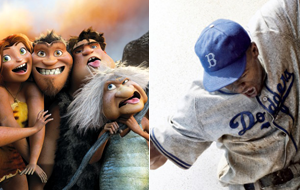 2013's story didn't change much after the top spot. The Croods (another March release) won April witht $75 million of its $163.9 million total (through April 30) accumulating over the past month. Last year's Hunger Games totaled $139.4 million during April, but The Croods is a big success in its own right.

The #2 through #7 spots for April didn't shake things up very much from last year, and that proved to be the problem. 42 carried its own weight with $70.7 million through 19 days of release after posting the best opening weekend ever for a baseball-themed movie. Oblivion opened well enough, but legs aren't proving strong as the film may struggle to pass $100 million once May's summer competition arrives.

Evil Dead and Olympus Has Fallen also proved to be solid sleeper hits this month. But with nothing else in the market to scoop up even a mini-blockbuster-sized audience, April 2013 will go in the books as the weakest since 2008's $495.78 million April tally. Since 2000, it ranked in the middle of the pack as the 7th "best" April.

Year-to-date, 2013 has rung up $2.902 billion through the first third of the calendar year--representing a 12.4 percent drop from the same period in 2012 and on par with 2011's $2.889 billion (the lowest grossing first four months of any year since 2008). Overall, 2013's first four months have seen attendance drop to the lowest level since pre-2000. That mark was previously held by 2011. 2013 fell below about 1 percent below that year's estimated ticket sales through April.

However, as promised, there's good news around the corner. May will kick off with a bang as Iron Man 3 is expected to post one of the best May openings of all-time. The latest Tony Stark-only sequel may not reach the heights of The Avengers' record $207.4 million debut, but it doesn't need to. May 10's The Great Gatsby continues to trend well in social network tracking, while Star Trek Into Darkness, Fast & Furious 6, and The Hangover Part III also promise to deliver big numbers. We expect the coming month to outperform May 2012 and target 2009's title of the biggest May ever.