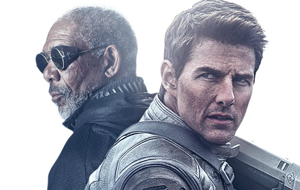 On paper, Oblivion has everything it needs to become a hit: two major stars, a big-budget sci-fi concept, and visuals which promise to be worthy of the big screen.

Those facts didn't stop the film from trailing comparable films across social network buzz two weeks ago. Things have since improved slightly with Oblivion generating 12,294 tweets over the last five days. That still significantly trails the 21,506 of Prometheus one week before release, but Oblivion has at least pulled ahead of John Carter's 6,745 during the same time frame. The positive-to-negative ratio has also improved to a strong 18.8-to-1.

There's still room for concern, though. Without the built-in audience of Prometheus, Tron: Legacy, or Rise of the Planet of the Apes (the latter two being strongly pushed as credits in Oblivion's marketing), Oblivion has a tougher uphill battle. Making matters worse will be the fact that Iron Man 3 opens just two weeks after the film. Translation: without extremely positive word of mouth, Oblivion's outlook for legs isn't good.

In fact, the film is in a similar position as John Carter was when it opened two weeks before the mega-breakout of The Hunger Games in March last year.

And then there's the "Cruise factor". While he remains an A-list star with an ability to draw in the right film at the right time, the consistency isn't what it used to be. Jack Reacher was a modest domestic hit with $80 million over the holidays--right in between 2010's Knight & Day ($76.4 million) and 2008's Valkyrie ($83.1 million). Cruise hasn't headlined a $100 million domestic earner outside of the Mission: Impossible franchise since 2005's War of the Worlds. Go back one more year for his last original property to hit the same mark (Collateral).

In a year where audiences are proving more selective with what they choose to see in theaters--and one in which just four films will have crossed the $100 million threshold by next week--is Oblivion hitting its target in the effort to get a leg up on the summer calendar? Stay tuned to BoxOffice.com for our final predictions next week.