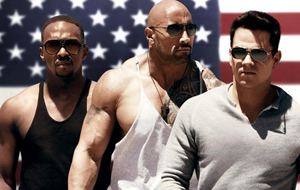 When you say the name "Michael Bay", the last words you expect to hear in the same sentence are "smaller scale". But that's exactly what the Transformers director has gone for with his latest flick, Pain & Gain. Due for release on April 26, the bodybuilding-action-comedy hybrid marks his first non-Transformers flick in nearly eight years (all the way back to 2005's The Island).

This time, he's brought along two A-list actors whose box office credentials have progressively begun to impress over the last couple of years. Headliner Mark Wahlberg had a fantastic 2012 with hits like Ted and Contraband, while Dwayne Johnson also continues to make a star name for himself thanks to his popular supporting turn in 2011's Fast Five, last year's Journey 2, and recently, G.I. Joe: Retaliation.

Even Johnson's lead in Snitch this year proved to go over well with audiences--that film debuted to a modest $13.2 million but has since legged it's way out to $41.5 million.

All of that said, how does Pain & Gain stack up when it comes to pre-release buzz? The answer: very well.

For a five-day tracking period one month out from release, Pain & Gain generated 1,330 tweets with a solid 12.2-to-1 positive-to-negative ratio. That's in line with Contraband's 1,232 tweets and tops Snitch by a noticeable 49 percent margin during the same time frames.

Over on Facebook, the Bay flick really shines. Pain & Gain boasts an impressive 271,332 fans as of April 3. At the same point in their release cycles, Snitch carried a still-strong 206,000 while Contraband was more sluggish out of the gate with just over 40,000.

This movie carries a much lower budget than Bay typically works with, but opening one week before the summer kicks off with Iron Man 3 won't be an easy task. Audiences will be saving their money for a busy May of movies. Still, with a trio of well-known names attached to Pain & Gain, a fair degree of success should be expected. Make no mistake, though: the film's somewhat left-field concept won't make for an easy sell. Paramount's marketing department is going to have to deliver a heavy punch in April.

We're currently predicting a strong $22 million opening weekend and $55 million domestic haul. They may be smaller numbers than Bay films are used to seeing, but they'll certainly be enough to qualify the movie a success when considering the stiff competition it faces in the weeks after release.