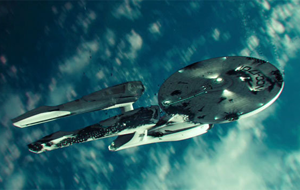 Paramount is entering its final marketing cycle for J.J. Abrams' upcoming Star Trek Into Darkness, and our social network tracking indicates it will be a crucial time for the film's blockbuster prospects.

During the five-day period from April 19-23, Into Darkness was responsible for a solid 7,269 tweets. That number looks disappointing at first glance when compared to Iron Man 3's 13,315 during the similar period one month out from its release. However, Trek's performance was actually comparable to last summer's The Dark Knight Rises (7,236 tweets). The positive-to-negative ratios were even quite similar (Trek's 16.2-to-1 versus Rises' 17-to-1).

We don't think Trek's overall anticipation is nearly as high as the final Dark Knight's, but the release calendars for both line up in an interesting manner with a major superhero movie opening a few weeks before each one.

Films like The Hobbit and Skyfall may also be comparable on Twitter when considering their similar blockbuster numbers and audience sizes, although the latter's results were skewed one month before its domestic release due to the early overseas opening in October of last year.

Over on Facebook, Trek totaled 2.574 million fans as of April 23. That's far behind the hugely fan-driven 13.76 million fans of Iron Man 3 and 11.69 million of The Dark Knight Rises at the same points in their release cycles, but still considerably ahead of Skyfall's 1.24 million. The Hobbit was even further behind with 796,541.

The news is solid still for Into Darkness over on Flixster. The film currently boasts an excellent 99 percent "want to see" score across more than 70,000 voters. On the final day before its domestic release, Skyfall accounted for 98 percent of 39,910 voters.

The BoxOffice.com team is currently predicting a $125 million domestic opening weekend and $335 million domestic total for Star Trek Into Darkness. Check back as we continue to analyze and update the film's box office prospects ahead of its May 17 release.

The Star Trek Into Darkness trailer: