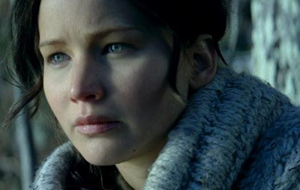 To offer more perspective, that number represented a 2,472 percent increase over the previous day's Twitter activity--comparable to The Hobbit's 2,779 percent jump (and way ahead of Iron Man 3's 641 percent).

Comparisons to the first Hunger Games teaser release are relatively pointless, but for reference, that film was responsible for 16,041 tweets on August 29, 2011 and 19,753 over the first three days. The positive-to-negative ratio was 3-to-1. A lot's changed for this franchise since then.

Over on Facebook, Catching Fire saw a 0.5 percent boost in fans during the teaser's three-day release window. Nearly 47,000 fans were added between April 15 and 17. That number is nearly identical to Iron Man 3's 45,281 fan increase (0.3 percent of the total) from March 5-7 earlier this year when its first full trailer launched.

The teaser trailer for The Hunger Games: Catching Fire: