close
May 2013 set new benchmarks at the box office. Where does the summer go from here? 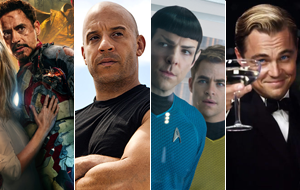 Tuesday Update: The final domestic market gross for May 2013 rang in at $1.143 billion.

Previously: Pop open the champagne bottles: summer is off to one of its best starts in history.

Once the final numbers are crunched today, BoxOffice projects May's cumulative box office haul will eclipse $1.14 billion--easily setting a new May record (which was reached far ahead of the deadline during Memorial Day weekend).

More importantly, it represents a big increase over May 2012. That month's tally was strongly inflated by the massive success of Marvel's The Avengers--accounting for a whopping 52 percent of the monthly market (Iron Man 3 accounted for a much lower 33 percent share of this May). As one of the most top-heavy months in summer box office history, only one other May release (Men In Black 3) managed to cross the $100 million threshold last year.

The story couldn't have been any different this year with at least one eventual $100 million earner opening during the first four May weekends.

Iron Man 3's impressive $378.95 million May gross after posting the second best opening of all-time ($174.1 million) has already helped make it the biggest standalone Tony Stark flick to date. That was off 28.8 percent from The Avengers' $532.5 million May 2012 haul, which meant it was up to the rest of the month's slate to also deliver the goods.

Warner Bros.' The Great Gatsby beat industry expectations with a breakout $50.1 million opening on its way to $124 million through May 31. Paramount's Star Trek Into Darkness then took its turn and, despite opening below expectations, showed solid holds in its first two weeks thanks to positive word of mouth. That sequel banked $169.2 million in its first 16 days.

The biggest story of the month belongs to Memorial Day weekend as a whole. Aside from the relative disappointment of The Hangover Part III, Universal's Fast & Furious 6 set a new franchise high with its $97.4 million three-day opening while Fox's Epic beat expectations and capitalized on the open family market.

The Universal action sequel's $117 million four-day take was part of a record $314.3 million extended Memorial frame--topping 2011's $276.9 million. The four-day weekend ranked second only to 2004 as the most attended Memorial Day weekend ever.

Year-to-date, 2013's estimated $4.04 billion through May 31 is just 6.8 percent behind last year at the same point (an improvement from the 12.4 percent year-to-year gap as of April 30). May's strong performers helped to make the first five-month total the fourth highest non-adjusted gross in history (behind 2012, 2010, and 2009, respectively).

The next question on everyone's minds: can June and the rest of summer follow suit?

In fairness, it was long evident that May's packed schedule would deliver strong numbers with so many well-established franchises coming up to bat. Even Now You See Me helped close the month on a strong note and should enjoy a healthy run throughout June. The same can't be said for After Earth, though.

June's slate will be headlined by Warner Bros.' Man of Steel and Disney/Pixar's Monsters University, both of which are trending strongly in online buzz metrics. Paramount's World War Z is another flick with strong box office potential, and in the wake of The Hangover Part III's disappointing reception, that could be a big advantage for This Is the End (June 12) and/or The Internship (June 7). We're more confident in the former comedy's prospects for now. June 28 will then see The Heat and White House Down square off in what could be a significant "battle of the sexes" among moviegoers. Overall, matching last year's non-adjusted $1.056 billion June gross looks challenging, but doable.