close
How is the father-son sci-fi flick from M. Night Shyamalan tracking ahead of its May 31 debut? 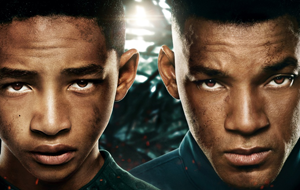 Then again, our social network tracking indicates buzz may be more present than the film has been given credit for.

During our five-day tracking period four weeks out from release, After Earth tallied an impressive 10,388 tweets with a strong 17.6-to-1 positive-to-negative ratio. That was 272 percent higher than Men in Black 3 at the same point in its release cycle last year. After Earth also blew away Oblivion's recent performance by a whopping 1,623%. Similarly released summer titles Super 8 and The Karate Kid also trailed--although the former carried a fantastic 20.6-to-1 positive ratio at the time.

Two of those films (Men in Black 3 and The Karate Kid) opened over $50 million domestically. Oblivion and Super 8 opened in the $35-40 million range.

Additionally, the film's Twitter activity has surprisingly been outpacing Star Trek Into Darkness during the period of May 3-7.

Facebook is another strong point for the M. Night Shyamalan-directed film. After Earth boasted more than 963,000 fans through May 7. Among our comparison points, only Men in Black 3 came anywhere near that level with 589,561 at the same point last year. Over the last five days alone, After Earth has added more than 963,000 fans--second only to Iron Man 3 among all movies being tracked.

The playing field evens out slightly on Flixster with After Earth carrying a 97 percent "want to see" score among 27,178 voters (as of May 6), running about 78 percent ahead of Oblivion through the same point before release. It's even stronger than Super 8 (which closed with fewer votes on the day before its release). The major difference comes from Men in Black 3, whose 95 percent score from 193,654 voters on the day before opening is largely due to its nature as a franchise.

The biggest catch for After Earth is its release at the tail-end of a month packed with action movies. It will be the third sci-fi flick to open over a seven-week period, following Oblivion and Star Trek Into Darkness. Moreover, the weekend immediately following Memorial Day isn't typically known for big openers--although last year's Snow White and the Huntsman bucked the trend with a $56.2 million debut. Still, it also benefited from a hugely disappointing May release slate after The Avengers. Will After Earth's advantages ultimately be overshadowed by a crowded market?

The BoxOffice team is currently forecasting a $37 million opening and $105 million domestic total for After Earth. Sony has been wise to emphasize the Smiths over Shyamalan's directorial credit in the marketing campaign thus far, two factors that may be contributing to the film's strong online presence up to this point. Still, a lot of big summer tentpoles open between now and May 31 (with plenty more after that). Demand for a second-tier summer movie could just as easily fluctuate in the other direction.

The After Earth trailer: