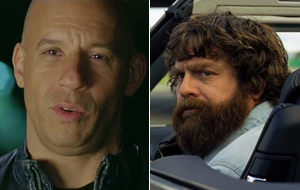 Previously: We're doubling down on social network analyses this week as we now take a look at two releases that could help drive one of the biggest Memorial Day weekends in a long time: Fast & Furious 6 and The Hangover Part III.

First up, Fast & Furious 6 has some significant advantages heading into its May 24 release. Not only did Fast Five become the most successful film in the franchise two years ago, now the sixth entry is driving consistently impressive online buzz. For the five-day period of April 26-30, Fast 6 was responsible for 35,272 tweets.

The release of a new (and supposedly final) trailer a few days ago has a hand in the big numbers, but it's only part of a larger positive trend. The quality of that discussion is strong with an 11.5-to-1 positive-to-negative ratio. Needless to say, the film is blowing past Fast Five's activity (7,002 tweets with a 4.3-to-1 ratio during the same period). It's not even far behind that of Skyfall (47,674 tweets) which was already in release overseas during the same point in the release cycle.

Where Fast & Furious 6 truly dominates is on Facebook. The film currently leads all other titles this week with an astounding 729,000 fans added since Friday, April 26. That's a 2.3 percent increase up to 29.14 million fans (as of April 30), with hundreds of thousands more on pace to join. The next closest movie during the same window? Iron Man 3--with 175,415. Fast 6 has added more than 1 million fans in the last 10 days alone.

As highly anticipated as that action franchise sequel is, it faces stiff head-to-head competition from The Hangover Part III. On Twitter, the two films are performing on par with another as the third Wolfpack flick tallied 38,663 tweets between April 26-30. The disadvantage: a disappointing 3.25-to-1 quality ratio.

The good news is that Hangover Part III is on par with 2011's Part II, which generated 35,960 tweets over the same period. The bad news is that film's ratio was a stronger 7.6-to-1. Moreover, while Part III's Twitter activity is still very strong, not expanding significantly over the last film could be an indicator of hesitation among audiences.

Worse yet, Facebook isn't The Hangover Part III's friend. The comedy has bled more than 3 percent (760,619) of its fans since April 25. The 23.1 million fan total is still strong, but we're keeping a close eye on the negative trend. Warner Bros. should be doing the same as May's final marketing stage will make or break the film's increasingly difficult odds of performing as strongly as Fast & Furious 6, let alone the Hangover predecessors.