Facebook Report: 'The Wolverine' Shows Moviegoers Are Ready For Another Superhero Flick 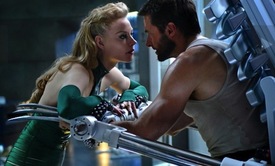 After the massive success of Iron Man 3 and Man of Steel, it's tempting to think that moviegoers will want a break from superheros. Fox's The Wolverine proves that's not the case.

In a clear sign of growing interest, the official Facebook page for The Wolverine has been adding fans at a rapid pace. The sequel tacked on another 82,042 likes this past weekend, pushing its total to nearly 1.6 million. Only Despicable Me 2 managed to add more likes over the weekend.

The popularity of the Wolverine character is clearly strong enough to overcome the lukewarm reception that 2009's X-Men Origins: Wolverine received. That film, along with 2006's X-Men: The Last Stand, served to weaken the X-Men brand in the eyes of die-hard fans. Luckily, 2011's X-Men: First Class brought some fan enthusiasm back to the franchise. The prequel scored an 88% approval rating from Flixster users compared to 72% for Origins. Wolverine's blink-and-you'll-miss-it cameo in First Class helped remind people how much they enjoy Hugh Jackman's take on the iconic character.

BoxOffice is currently forecasting a healthy $65 million North American debut for The Wolverine. The outlook in key foreign territories such as China, Japan and Russia is also bright. The Wolverine should have little trouble passing the $373 million global haul of X-Men Origins: Wolverine.

Sydney Marks contributed to this article.