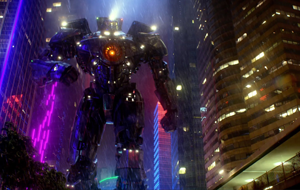 The studio's focus on spreading word through fan conventions and the so-called "Internet crowd" has been a smart play. Next, they have to escalate things and draw in general audiences (most of whom don't pay attention to a film's ad campaign until the final week or two of release).

So far though, our social network tracking indicates that--at the very least--the genre fan crowd is pumped for del Toro's popcorn flick. Pacific Rim accounted for 4,818 tweets between June 14-18. That's 44 percent behind the comparable time frame performance of last year's Prometheus, though its nature as a "prequel" to the Alien franchise likely accounted for the higher activity. Another good sign for Pacific Rim is its 104 percent stronger performance than 2011's Cowboys & Aliens.

Warner Bros.' July tentpole is performing even more strongly on Facebook. Its 253,783 fans 24 days out from release top all of our non-sequel comparison films. Pacific Rim has a healthy 24 percent lead over Prometheus' same-point count, and huge 122 percent and 517 percent advantages over Cowboys & Aliens and Super 8, respectively.

Last but not least, the Flixster user score for Pacific Rim sits at a strong 98 percent "want to see" from roughly 32,000 voters. With over three weeks to build on that, it's on pace to easily surpass Prometheus' final count of 36,870 voters (which gave it a 97 percent score). Cowboys & Aliens had a strong vote total (also within reach for Pacific Rim), although its anticipation level sank as release approached and poor buzz spread. Super 8, meanwhile, was the modest pre-release performer before its word of mouth carried it to great success.

Outside of the data itself, Pacific Rim has some intangible benefits. The film's grandiose action and popcorn nature offered by the "giant robots versus monsters" concept may prove appealing to young boys, teens, and men of all ages--something that drove the entire Transformers series (although that had built-in recognition prior to its release). That's an advantage that Prometheus lacked on several levels (namely through its R-rating and obscure plot). Cowboys & Aliens, meanwhile, opened two weeks after the Harry Potter finale and one week after Captain America: The First Avenger--the kind of direct genre competition that Pacific Rim doesn't face before its release.

And of course, there's the history of WB in July to consider. Since 2007, the studio has literally dominated the mid-July weekends thanks to Christopher Nolan's Dark Knight sequels, three Potter flicks, and Nolan's original blockbuster, 2010's Inception. The studio enters Pacific Rim's July 12 release date with a lot of summer know-how in terms of selling their movies to a large audience.

Guillermo del Toro's own original blockbuster could be poised for a strong opening weekend, but it will be more about the film's legs should it play as well as early buzz from industry insiders indicates. Moreover, we expect the film's overseas appeal to be even bigger. We'll soon find out. In the meantime, stay tuned to BoxOffice for continuing coverage and updated forecasts on Pacific Rim.