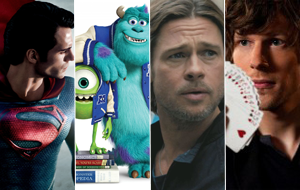 For a second consecutive month, records have fallen.

The first two months of summer have now totaled a massive $2.387 billion, more than any other combined May and June in history. That figure is 14 percent higher than 2012's comparable period and tops the previous best summer start of $2.106 billion in 2009.

June's success doesn't have just one big movie to thank as every weekend of the month saw at least one movie carry more than its weight. Now You See Me's solid opening and impressive legs set the stage, followed by The Purge's sleeper hit success. The former crossed the $100 million domestic barrier over the past weekend.

The month truly hit its blockbuster stride when Warner Bros. successfully relaunched the Superman franchise with Man of Steel's excellent $116.6 million opening weekend (excluding the controversial $12 million worth of Wal-Mart preview sales). This Is the End opened to healthy numbers and proved to grow legs quickly thanks to strong word of mouth, followed by last weekend's massive market over-performance led by strong openings for Monsters University and World War Z. Combined with the holding power of those films, the final weekend of June continued the upward trend as The Heat debuted to $39.1 million.

June wasn't without its disappointments, though: After Earth and The Internship each underwhelmed (the former to a significant degree) relative to the previous history of their star names. Meanwhile, White House Down opened below expectations this past weekend. That being said, each film had its fair share of disadvantages--an overwhelming slate of competition being the biggest, alongside some poor strategic planning in terms of release dates.

In terms of attendance, the month saw more tickets sold than any June since 2004. All-time, it was the third most attended June in history--trailing 2004 by just 2.3 percent.

As for the first half of summer, 2013's attendance levels haven't been this high since 2004 (2013 trailed that year by just 0.3percent). Overall, 2013 boasts the fourth highest ever attendance levels of May and June combined (2002 holds the record by a 5.5 percent advantage).

Year-to-date, 2013 has now grossed $5.29 billion. That's off 1.9 percent from the same point last year, but summer's record performance has significantly closed the gap since the year was trailing by an unsettling 10 percent at the end of April. With May and June accounting for 45 percent of the year-to-date gross so far, that makes this year's first half the most summer-heavy in history--topping 2008's previous high summer share of 42.3 percent through June.

July has some promising titles ahead with Despicable Me 2 arguably leading the pack. The BoxOffice team is projecting a $365 million domestic run for the highly-anticipated sequel, opening July 3. Meanwhile, we're also optimistic about the box office potential for Grown Ups 2, The Conjuring, and The Wolverine. It will be the month's wild cards--The Lone Ranger, Pacific Rim, etc.--that ultimately decide whether or not this summer can continue trending ahead of recent years.

Tags: The Purge, Man of Steel, The Heat, White House Down, Monsters University, World War Z, This Is the End, The Internship, Now You See Me, Fast & Furious 6, After Earth
Print