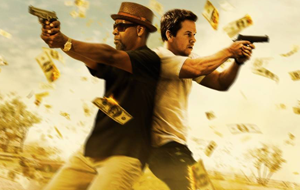 2 Guns posted a modest 1,250 tweets as its most recent five-day tracking came in behind the actors' most recent solo efforts, Flight and Broken City. However, activity has picked up over the last few days and should continue to do so throughout July. Significantly outpacing the activity of 2010's The Other Guys is an encouraging sign, but there's work to be done if the film is going to come close to Safe House's Twitter buzz.

The film's 57,675 Facebook fans is another solid but modest jumping point as it trails Broken City and Safe House there as well. We're excluding Flight below as it barely registered with just 1,465 fans less than four weeks out from release, but 2 Guns does have an advantage over Contraband through the same point.

2 Guns gets its best showing from the Flixster community. Through July 9, 98 percent of 21,126 users are anticipating seeing the film. That already handily exceeds the day-before-release anticipation level of all our comparison films. (Note: Flixster data for Contraband and The Other Guys were not available at the time of writing.)

There's no doubt that both Washington and Wahlberg are at the top of their game right now, but will a summer release for 2 Guns translate to another big box office hit for the two of them? We think so. It's likely only a matter of a time before Twitter and/or Facebook activity pick up to higher levels as more high profile July releases enter the market and burn off attention. Universal also has yet to fully ramp up the marketing machine--an important fact given each actor's strong appeal to general audiences.

The star combo certainly has its merits on paper, too: Wahlberg's three best openers over the last five years have featured the actor in a comedic capacity (Ted, The Other Guys, and Date Night), while Washington's all-time top three openers (American Gangster, Safe House, and The Book of Eli) come from the action/thriller genre. With 2 Guns promising to offer the best of both worlds, it may be just what audiences are looking for when summer starts winding down next month.

The BoxOffice team is currently forecasting a $43 million opening weekend and $127 million domestic run for 2 Guns. We'll continue to update those figures as needed in the weeks ahead before release.