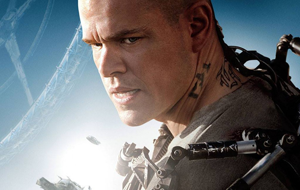 Four years ago, young filmmaker Neill Blomkamp burst onto the scene with his wildly successful low-budget sci-fi flick, District 9. That movie banked an incredible $115.7 million domestically and $208 million globally on a mere $63 million budget (including estimated marketing costs). Ever since, moviegoers and the industry alike have waited for his follow-up movie.

As another original sci-fi story with an R-rating, Elysium certainly has some work ahead of it. But unlike Blomkamp's debut, this one has some help in the marketing department with a recognizable cast led by a proven, veteran leading man in Matt Damon (who drove another sci-fi flick, The Adjustment Bureau, to solid returns in 2011).

Add to that Sony's "It's better up there" viral marketing campaign advertised across various websites this summer, and you get an unknown property whose advance awareness is reaching closer to Inception than Pacific Rim levels.

Moreover, where District 9 faced direct competition from Quentin Tarantino's Inglourious Basterds one week later in August 2009, Elysium faces a weaker slate next month (aside from 2 Guns, opening one week earlier). But as we've seen recently with films like Duncan Jones' well-regarded Source Code, it's still no walk in the park for an unknown title to make a splash at the box office.

That being said, Elysium's Twitter activity performed 16 percent ahead of Looper four weeks out from release. The glut of sci-fi films since then could be a minor disadvantage for Blomkamp's film, but on the flip side, good buzz for Elysium may make that a non-factor over the next few weeks.

Twitter is only the tip of the iceberg. Elysium's 202,144 Facebook fans 24 days out from release are 42 percent more than Looper, 137 percent more than Oblivion, and virtually on par with Prometheus at the same points in time. The latter comparison is especially intriguing given its nature as a semi-franchise sequel from a veteran director. For Elysium to be building as much interest as that film speaks volumes about its long-term potential.

The good news doesn't end there: among 37,810 Flixster voters through July 16, Elysium boasts a superb 99 percent "want to see" rating. That represents 2.5 times as much interest as Oblivion had at the same point before its debut, and a higher volume of voters than Looper, Total Recall (2012), Prometheus, and Rise of the Planet of the Apes had on the day before each of their respective releases.

After a summer filled with sequels treading familiar ground, adult and young adult audiences may be ready for one final high-concept huzzah on August 9. Blomkamp may not yet be a household name, but don't underestimate the marketing effectiveness of "from the director of District 9" in tandem with what has proven to be a solid ad campaign so far.

The BoxOffice team is currently forecasting a $30 million opening weekend and $90 million domestic haul for Elysium, but stay tuned in the coming weeks as we update our expectations for the Neill Blomkamp film as needed.