'Olympus Has Fallen': What Went Right? 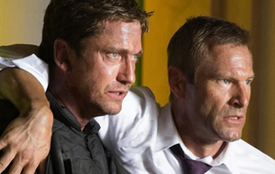 Director Antoine Fuqua's Olympus Has Fallen exceeded all expectations this past weekend with an impressive $30.5 million opening frame (pending actual results later today). That bested the director's previous best opening of $22.6 million from 2001's Training Day, but more importantly it represents the best opening from an action film in 2013 so far.

Beyond that, Olympus smashed distributor FilmDistrict's previous best opening weekend (Red Dawn's $14.3 million in November). The film is locked to become both Fuqua's and FilmDistrict's highest grossing domestic release yet. 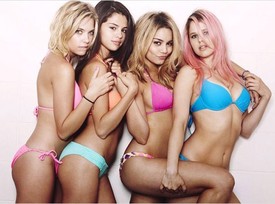 Saturday Update: Spring Breakers has added more than 30,000 Facebook likes since early Friday morning, push its total past 430,000. The A24 release inspired 3,365 tweets on Friday with 2:1 positive:negative ratio.

Early reports indicate that the film won't even hit $5 million this weekend. We will release an official projection this morning.

Friday Update: Spring Breakers has added more than 55,000 likes on Facebook since last Friday. It's total could hit 400,000 after this weekend. The controversial flick inspired 1,931 tweets with a 2:1 positive:negative ratio on Thursday, and our tally is already up to 1,611 for today.

Star Trek Into Darkness continued to dominate interests as the film debuted a short new teaser last week ahead of the full international trailer yesterday. Behind that movie, Iron Man 3 held on to #2 yet again while Man of Steel lost some ground in voting but managed to stay just barely ahead of Thor: The Dark World (which moved up one spot to fourth place).

The biggest moves of the week came from Oblivion and The Hangover Part III. As the former's April release approaches, buzz is slowly building and the result was a four-spot leap to #7. Meanwhile, May's third Hangover jumped three positions to crack the top ten for the first time. 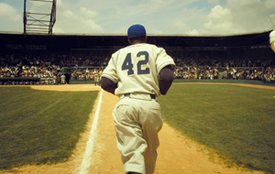 Writer/Director Brian Helgeland's 42 is scheduled to open on Friday, April 12 (opposite Scary Movie 5) and despite the decidedly rough history of baseball-themed movies at the box office, the film is--forgive the pun--knocking it out of the park across social network metrics.

From March 15-19, 42 was responsible for 8,454 tweets with a stunning 54.8 positive-to-negative ratio. The Twitter activity was 122.4 percent higher than Moneyball during the same point in its 2011 release cycle and a whopping 444.7 percent ahead of last year's Trouble with the Curve. In fact, it was the fifth most talked-about movie on Twitter yesterday (March 20). 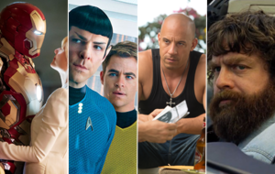 Benchmarks are hard to live up to. The new standard for a May blockbuster was birthed last year when Marvel's The Avengers broke a litany of box office barriers.

Now, 2013's lucrative summer season is approaching with some among the industry--and its fans--skeptical that this May can't measure up to last year's performance.

Before we begin to tell you why, keep one thing in mind: quality is ultimately king. If audiences aren't happy with the product they're given, they won't keep showing up after big opening weekends. They'll opt to catch up on Redbox titles and Netflix queues, or simply forego movies completely to enjoy the seasonal air. 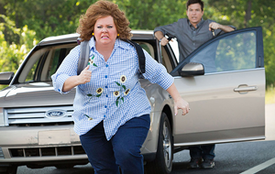 After his highly praised debut feature (the documentary King of Kong: A Fistful of Quarters), Gordon went on to send the comedies Four Christmases and Horrible Bosses to $120.2 million and $117.5 million, respectively.

Overall, Identity Thief still has some work ahead to catch up with those titles as its estimated $126.1 million global take (overseas figures last updated on Monday) trails Bosses' $209.8 million and Christmases' $163.7 million figures. 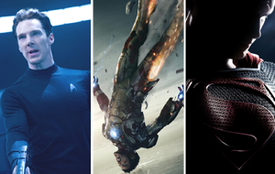 With Oz: The Great and Powerful exiting in fourth place last week, our forum members had the opportunity to fill in that gap.

The top ten itself didn't see any films lose ground, although The Hobbit: The Desolation of Smaug enjoyed a three spot bump up to fourth place. Meanwhile, Fast and Furious 6 tied for seventh with Pacific Rim and strong Internet buzz pushed Evil Dead into the top ten as it tied for #9 with Monsters University.

The big story of the week, however, was The Hangover Part III. Fresh off the debut of that film's first poster and teaser trailer last week, the comedy three-quel leaped thirteen positions up to #12--its highest ranking to date.