Indiana Jones’s first adventure, Raiders of the Lost Ark, is a wonderful piece of entertainment that was a result of Steven Spielberg and George Lucas collaborating brilliantly to create a picturesque icon of masculine heroism; showcasing an ideal lead that is still at one with his faults. It also plays as being extraordinarily creative and oddly magical. We know the world we are watching doesn’t actually exist but something inside us wants it to. Raiders is a film that makes us long for adventure ourselves; true escapism. Sadly, that film was born from the imagination of Lucas 27 years ago and the only longing his viewers demonstrate now is for him to leave well enough alone. 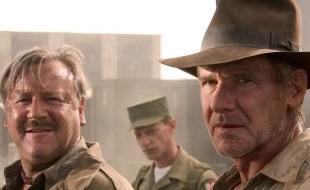 There was little doubt that Crystal Skull was indeed going to be a box office sensation. The charm of the original trilogy still brings out the youthful adventurer in all of us and the public seemed to really take to the idea of “completing” the series. In its first week out, the film did a remarkable $125 million in business. While sustaining such success would be nearly impossible to begin with, word of mouth and the release of the Sex and the City movie hurt it even more. Still, Crystal Skull managed to gross a staggering $317 overall, seeing a maximum of 4,264 screens. I assure you that the picture’s large fiscal returns in no way reflect the quality of the actual film.

From the movie’s opening, we’re given a familiar scenario: Indy is in trouble and must fight his way out. Okay, good stuff so far, particularly the introduction of our lead character which shows that Spielberg still knows how to fully prey on an audience’s anticipation. Our wanting makes his scenes stronger and for the first act we’re still left wanting. However, this installment is easily more convenient than its predecessors and this only becomes all the more obvious as the film continues. It also becomes apparent that there is only about 20 minutes of actual content in a two-hour film. Themes dealing with parenting, reconciliation, and identity are glossed over entirely with a series of self-aware jokes to make room for long, less iconic action scenes. Of course, I don’t expect an incredible, thematic depth to popcorn flicks but without it, this movie is nothing but an inferior, unnecessary version of the beloved 80’s films.

Then there’s the ending. Wow. Some may argue that such "bravado" is the filmmakers’ way of saying they’re taking a classic series to unseen heights but I simply do not concur. This would imply that the rest of the movie strived for greatness when it did nothing but repeat old themes and over-saturate itself with pointless CGI stunts in favor of the practical, memorable ones that made the series such a success. Fan boys might be sold on the title alone but I’d recommend most to seek adventure elsewhere.