Virtually unheard of by the general population, Snow Angels, the first of director David Gordon Green’s two releases this year, played primarily to the festival circuit and art house circle. Green’s other 2008 release, Pineapple Express, has been considerably more successful.

At its peak, Angels only saw its name on 47 marquees nationwide and it ended its theatrical run with a mediocre $402,858 gross. Green does have a bit of a cult following though, which should play to his favor despite the lack of advertising behind Angels. I’m sure there are quite a few renters and buyers who are quite aware of the film and only now have the means to view it. 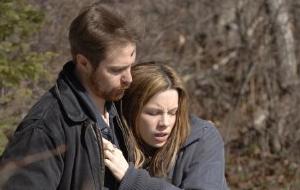 The picture itself is a dreary one. There is a definitive mood that Green sought to accomplish, and it’s one that paints an ominous vision of Anwhere, USA complete with grey skies and scenery that eschews Americana. Inside this world lives Arthur (Michael Angarano), a shy high school student who witnesses the troubling ends to many relationships surrounding him and the ripple effect they have on the microcosm that is his town. Kate Beckinsale and Sam Rockwell play such a couple that had failed at romance before the film’s opening - a doomed experiment in love that acts as the movie’s tragic hub. Their shortcomings extend to the rest of the town, branching off and rooting themselves in the lives of others.

Unfortunately, the vision of Green’s is a sadistic, sloppy, and shallow one. It seems overtly concerned with manipulating its audience into garnering an emotional connection that is simply not deserved. There certainly is power behind this kind of filmmaking but it’s a power that is not wielded correctly, making it dangerous. Angels abrasively criticizes the small town lifestyle, traditionalism, and habitualness without any backing or true exploration. On the surface, the film almost feels similar to the recent work of Lars von Trier but, unlike von Trier, Green seems to have nothing of interest to say or even worth saying for that matter. If I’m going to sit through such a harshly toned picture, I expect there to be a reason behind it. With Snow Angels, there isn’t.