Concocted purely for summer enjoyment, Get Smart is, at the very least, an interesting modern day take on the classic television show. Many younger viewers have probably never viewed an episode of the original series in their lives, yet this reimaged, contemporary Smart may make fans of them yet. Thankfully, screenwriters Tom J. Astle and Matt Ember understood their source material and they were able to decipher which elements worked and which did not. The original relationship between Agent 99 and Max Smart certainly belongs in the latter category, and it has been give a much needed revamp. 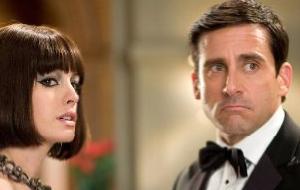 The performances, as a whole, are apt. Carell was more or less the obvious choice for the lead and his emulation of Smart’s verbal and physical gaffes proves sufficient. Still, it's quite evident that he managed to interject a bit of his own personality into the character. Part of me applauds him as he’s clearly having fun but I can’t help wanting to see him in more bold, dramatic roles like the one he played in Little Miss Sunshine. Sure, many comedic moments exist in that indie hit, but Carell was capable of bringing a certain darkened realism to the role and by further developing his chops he could easily break out of the “one note” mold he currently finds himself in; regardless of how successful he’s been as of late.

Speaking of success, Smart was certainly a financial hit. The film peaked on 3,915 screens and it grossed a total of $130.9 million during a typically overcrowded summer.

Still, the charm of Carell, charisma of Dwayne Johnson, and stunning “features” of Anne Hathaway won’t be enough to please all. There’s a certain amount of B-movie cheese spread throughout the film, leaving the jokes as, well, cheesy. Seeing James Caan’s name in the opening credits gave me hope but instead of utilizing his talents the film has him portray a weak, muddled version of our current president. Bill Murray turns up in a brilliant cameo that lasts all of twenty seconds and features way-too-obvious physical gags.

In the end, I’m not sure what to make of this one. While it works as a youthful adaptation it seems a bit immature and tries far too hard to garner laughs which ultimately don’t come. Outside of the casting and realization of the characters in general, not much worked. With the recent trends in spy culture, one can’t help but wonder why Smart didn’t try to satirize the genre’s new developments instead of cramming modern humor into aged source material. Either way, expect a sequel.