Critics took a liking to this film adaptation of the popular doll series and audiences seemed to enjoy it as well. And why shouldn’t they have? Kittredge is actually palpable family entertainment and its charming innocence carried it to a domestic haul of $17.6 million after it hit a high point of 1,849 locations. 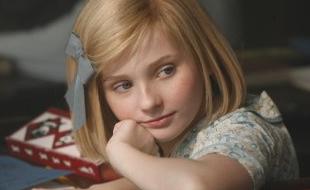 The stories behind the doll series have always been routed in historical fiction (don’t ask me how I know this) and Kit’s tale is routed in the spirit, or rather dispirit, of the Depression. The story itself is a rather simple one, offering a child’s perspective on the economic crisis which widely plagued the pockets of American families. Continuing with this theme, our title character acts as a determined journalist whose biggest ambition is to sell stories to a widely read Cincinnati paper. Knowing the head editor wants something fresh, she sets out to expose the truth about hobos, their language, and their loyalty towards each other. Of course, with the crime rate rising and citizens becoming increasingly concerned, a paranoid environment ensues and the blame is placed squarely on those less fortunate. Because of this, the movie takes a thematic turn towards one of mystery and sleuthing, though it’s hardly a jarring transition.

The snob in me wished there was a bit more going on below the surface. Many children's movies these days still contain some pretty heavy underlying themes that can give their accompanying older viewers something to munch on. Still, with a setting as potentially rich as the Depression (pun intended), the chances that the filmmakers had to develop even a minor commentary—after all, the lessons of the Depression have become very relevant as of late—are wasted. The character of Kit certainly aspires to be more in an era that hardly nurtures dreams but the film decides to play it safe, which is fine and all; it’s certainly cutesy enough to get through. I just can’t help but feel that such simplicity doesn’t need to be 101 minutes long.